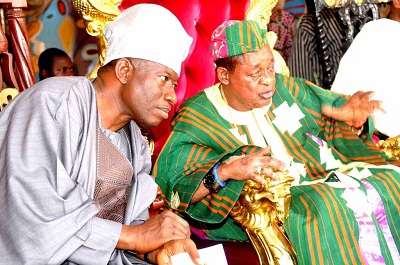 President Goodluck Jonathan on Saturday visited the Alaafin of Oyo, Oba Lamidi Adeyemi at his palace, to seek royal blessings for his re-election.

Jonathan, who was accompanied by PDP National Chairman, Alhaji Adamu Muazu; his Chief of Staff, Brig.-Gen. Jones Arogbofa (retd.); Minister of State for FCT, Olajumoke Akinjide, former Governors of Anambra and Ogun States, Peter Obi and Gbenga Daniel respectively, among others, informed the monarch that the report of the National Conference must be implemented for the country to be changed for better, stressing that he did not influence the outcome of the confab.

He said: “We set up the National Conference, and the report is ready. As a government and as a party, we believe that those who did that report meant well for the country. We gathered almost 500 Nigerians from all walks of life including the traditional institutions, young people, teachers, journalists, lawyers, everybody. I never influenced it because I believe that what is good for Nigeria is good for me.

“And I believe that if really we want to change this country in a better way, we should implement that report. The government and the party are totally committed to implementing that report, but we need a National Assembly that will work with us. So, we’re using this platform to plead with our people of this great state to support the PDP to send their strong daughters and sons to the federal level to work with us so that we will implement that report because I know how passionate some of you’re in terms of that report”.

The president also stated that with his administration’s power sector reforms, Nigerians would soon begin to take power supply for granted.

“The privatisation processes are almost completed and the change-over phase from public to private sector is ongoing. We believe in the next two years, this will be consummated and Nigerians will take power for granted. We believe that if you give us your mandate, at least, in the next two years, this epileptic power supply will be a thing of the past and it’ll be the basis for the growth of micro, small and medium enterprises in this country”, Jonathan said.

In his remarks, the Alaafin said the president was noted for “dynamism in the country”.

Elozonam Is A Man Of Strength And Wisdom – BBNaija’s Diane