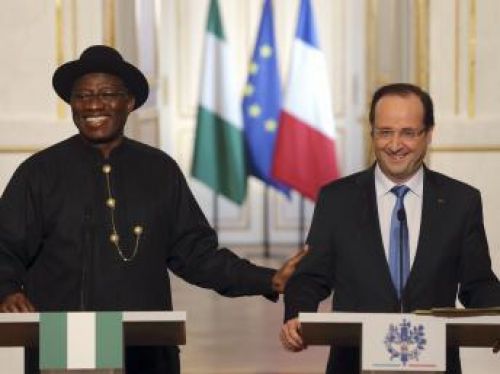 The planned visit by President Goodluck Jonathan to Chibok, Borno State, the scene of last month’s abduction of over 200 female students of Government Girls Secondary School, on Friday, has been cancelled.

Reuters had reported on Thursday that the president was billed to visit Chibok today, one month after the school girls’ abduction before jetting out to Paris, France, to participate in a summit convened by President Francois Hollande to discuss fresh strategies on Boko Haram and other terrorist groups in West and Central Africa.

However, 24 hours later, Reuters would report via a tweet that “Nigerian President Goodluck Jonathan cancels first visit to village from where schoolgirls were abducted from over security fears”.

Meanwhile, Special Adviser to the President on Media and Publicity, Dr. Reuben Abati, in a statement yesterday said Jonathan would be accompanied to Paris by the Minister of Defence, Lt-Gen. Aliyu Gusau (rtd), the National Security Adviser, Col. Sambo Dasuki (rtd.) as well as other principal aides and advisers.

According to the statement, President Jonathan will return to Abuja at the conclusion of the summit on Saturday.

It Is Important For Hazard To Score Goals – Conte

Billionaire Bails Hamburg Out Of Crisis