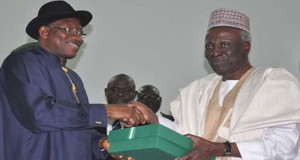 The All Progressives Congress (APC), yesterday, faulted a statement credited to President Goodluck Jonathan that the implementation of 2014 National Conference report was dependent only on his re-election.

According to the party, Jonathan’s statement was illogical and unreasonable and meant to earn cheap popularity from the South West marginalised by his administration.

“The lopsided nature of the federation his (Jonathan) administration inherited about six years should have swung into action immediately and put necessary mechanisms in place to equitably and fairly restructure Nigeria for the benefit of all,” a statement by the National Vice-Chairman (South West) of the party, Chief Pius Akinyelure said.

“Jonathan is using the report of the 2014 National Conference as a political weapon to sneak into the hearts of South-West people, whose his administration has not been fair to despite their overwhelming support for the president in 2011.”

“A President, under whose watch the Ekiti election was rigged, cannot restructure Nigeria. A president that grant hardened amnesty to ex-convicts cannot evolve equitable Nigeria.”

The party also urged the people of South-West and Nigeria in general, not to take the President seriously again, noting that the Peoples Democratic Party (PDP) had no idea on how to move Nigeria forward.

According to the party, its flag bearer, Muhammadu Buhari, and his running mate, Prof. Oluyemi Osinbajo, once elected, would initiate action “to amend the Nigerian Constitution with a view to devolving powers, duties, and responsibilities to states, in order to entrench true federalism and the federal spirit.”

It’s Important To Have Patience – Conte