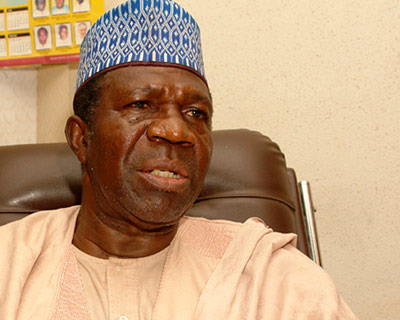 The Senate President in the short-lived Third Republic, Senator Ameh Ebute, has faulted former President Olusegun Obasanjo’s claim that he cannot be in the Peoples Democratic Party, PDP, which parades an ‘indicted criminal’ in the person of Chief Buruji Kashamu, as its leader in the South-West.

Kashamu is the Chairman, Mobilisation Committee of the PDP in the Southwest and self-styled leader of the party in the region.

Ebute, in an open letter addressed to the former president, copies of which were made available to journalists in Abuja on Monday, accused Obasanjo of double standard.

He recalled that Kashamu was a creation of Obasanjo, who the ex-president used in fighting his many political battles especially against the former Governor of Ogun State, Chief Gbenga Daniel.

The former senate president was reacting to Obasanjo’s response when the national leadership of the party begged him recently that he should return to the party and lead it.

In his response to the pleas, Obasanjo stated that one of the reasons why he was uncomfortable participating in the activities of the party was due to the fact that a certain drug baron was made the leader of the PDP in the South-West geo-political zone.

He had said, “For instance, as a former President of Nigeria, the chairman of West Africa Commission on Drug and a member of Global Commission on Drug, I cannot accept that the zonal leader of my political party and, worse still in my zone, will be an indicted drug baron wanted in America.

“How do I explain that to friends outside Nigeria? This is only one of the many issues that I have pointed and still pointing out. I have national and international standard to maintain and reputation to keep and sustain”, Obasanjo said

In his letter, Ebute said without Obasanjo, perhaps Kashamu would have remained unknown, adding that it would be wrong for the former president to now turn around and be criticising his former associate.

He said, “I wish to recall, sir that when the former Governor of Ogun State, Otunba Gbenga Daniel, seized the PDP structure from you in 2008/2009, it was this same ‘drug baron’ whom you aligned with to create parallel party structure and institute legal action against the party.

“It was this same man, who secured the court judgment that eventually got your faction of the PDP recognised by the national leadership ahead of the 2011 general elections.

“Your daughter, then Senator Iyabo Obasanjo, worked closely with this same Kashamu to protect and defend your sagging and diminishing political interest and relevance in your local turf in the state.

“This was a period when Buruji’s frequent visit to your Abeokuta Hill top residence was always greeted with celebrative feasting on bowls of pounded yam and egusi soup.

“The question is what were you telling your ‘foreign friends’ about this man then?”