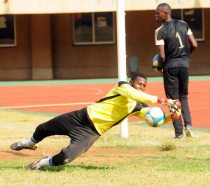 Despite winning 2-1 against away from home in Kampala, the sudan League champion bowed out falling on a 3-2 goal aggregate. Salim Jamal was outstanding as KCCA  would have bowed down out of the competition but  for the heroics of the 19 year old who  kept the team in the hunt with among other saves another  penalty stop just like he did in sudan one week ago.

Striker Tony Odur, who also scored in the first leg in Khartoum last weekend, gave the hosts the lead in the seventh minute with a well taken loop over advancing goalkeeper Akram Elhadi. Sudan settled quickly to dictate the pace for longer spells before equalizing with five minutes to half time. Defender William Wadiri’s blunder cost KCCA FC as Ahmed El Basha made no mistake curving in a cross past the KCCA FC goalkeeper.

The first half ended 1-1, but with the visitor showing more intent.  On resumption, El Merreikh dominated play for longer spells and put the KCCA FC under pressure. In the 82nd minute Mohamed Traore made it 2-1.

“We should have won the game and qualified, but my strikers failed to convert several chances,” El coach Michael Kruger said after the game. The KCCA FC coach George Nsimbe was happy to progress to the next round. KCCA FC will now face Zambia’s Nkana Red Devils in the first  round later this month.

I’ve Not Had Better Guys Than Matic In My Career –...

Alex Ferguson’s £3 million worth of wine collection to go on...