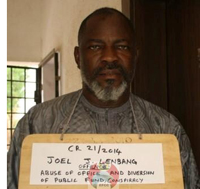 Justice Donatus Okorowo of the Federal High Court, Jalingo, Taraba State has fixed April 20 to 24, 2015 for continuation of hearing in the on going trial of a former accountant general of Taraba State,  Joel Joseph, who is being prosecuted by the Economic and Financial Crimes Commission, EFCC, for offences bordering on obtaining by false pretence.

The accused person, who was arraigned on an 8-count charge in July 2014, allegedly abused his office and stole funds amounting to N1.5billion. He however pleaded not guilty and was granted bail by court.

At the resumed hearing of the case on March 5, a prosecution witness and chief accountant of the state, Bautn Isa, told the court how his office raised the alarm over irregular increase in the figure for salary payment approved by the accused.

He said as a result of the whistle blowing, a committee was set up to investigate the payroll which eventually confirmed that the former accountant general fraudulently inflated the wage bill of the state.

The Presidency Is Planning To Implicate Me – Bukola Saraki