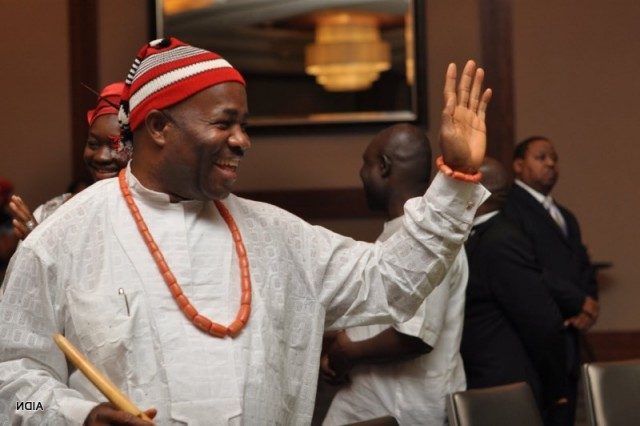 Minister of Niger Delta, Senator Godswill Akpabio has come out to say that forensic audit of the activities of the Niger Delta Development Commission, NDDC is important if we really want to uncover the illegalities that have occurred there.

He revealed this as he answered questions from Journalists after meeting closed doors with the House of Representatives Committee on NDDC which held a hearing on the activities of the commission.

He added that the Commission is yet to record any success story in the last 18 years, so it has to be repositioned.

His words, “They have not brought out the result of the hearing yet. The investigation went well; it was all about legality.

“We have started (on abandoned projects) already. For instance, the head office of the NDDC which was started and not completed, we are on it and promised that working closely with the committee, we will deliver the head office by April 2020. The big cardiovascular hospital abandoned for years which is 80 per cent complete, we are also working to ensure that is completed. About 91 containers of electrical equipment including 5000 transformers are at Onem port and we are on the verge of clearing them and we believe when we do we will give light to a lot of communities in the region.

“The forensic audit is on course. The intention is that if anybody has committed misappropriation or otherwise, it is a window of opportunity for them to go back to site for monies they collected and complete the projects, or the forensic audit if it does unearth those things, people have a right to refund or face the law.

“The essence of it may not necessarily be to unearth fraud, it is found out why the failure of the agency in 18 years because we cannot say it has been a success story.

“Why has it not lived up to its expectations and why do we have so much poverty in the Niger-Delta. Nobody seems to own all those projects of the Niger-Delta especially misplacement of priorities. You have no single primary school but you can buy up to one million desks and pile them till they get spoiled.

“We also have to talk of the responsibilities of the not just the IOCs but the oil companies operating in the region. Why have they not been remitting their statutory percentage to the commission? How come many of them remitted those monies to wrong accounts and they are still owing the commission.

“The forensic audit is all-encompassing; it is about management, the projects even when the projects come in it may not be useful to some of those communities because of duplication as a result of lack of synergy with the states. For instance, when a state government is doing a particular road and the NDDC contractor will put his signboard and collects money and the state government eventually pays for the road. Those things are going to be unearthed.

“You also have to talk about the quality of deliveries; how come roads of the NDDC cannot last five years. Is it just cut and paste or a function of politically motivated infrastructure which is just meant to syphon money? The region is totally polluted. The oil spills, illegal refineries have destroyed a lot of the soil in the region. What can we do to ensure remediation? At the end of the audit, I will expect that the governance structure will have been well set; I will expect that we will now have the total number of projects and the total number of people who collected money without doing those projects. We will be able to know programmes that were useless right no to have been done.

READ  Insecurity: We Never Apologised To Buhari For Inviting Him To NASS — Reps

“Above all, we would have made NDDC bankable; it is important that such an organisation should be able to approach African Export-Import Bank and bring in money and build major industries, service a lot of medium and small scale industries for employment opportunities so we plan for what I call post amnesty initiatives where more than 3000 youths are in amnesty now. They cannot remain in an amnesty that is why the need to have a new NDDC that is the reason for the forensics and people should not think it is targeted at anybody. It’s to find out what went wrong and how come that people do not own any of the projects of the NDDC.

“If NDDC is suffering from limitations on account of monies owed by the Federal Government this audit will also bring that out. The idea is to make it bankable; is it true that we are owing over a trillion or two trillion as debt, are they contingent liabilities or are they actual? So it is very important that at the end of it all you can present your balance sheet and ask for a loan.”

Is Manchester City Ready To Win The UCL?