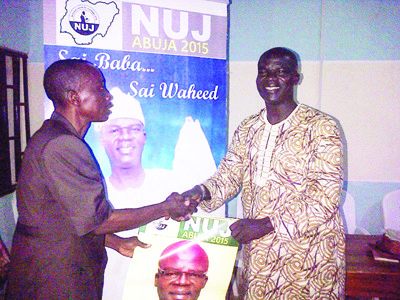 Chairman of the Nigeria Governors’ Forum, Abdulaziz Yari, has tasked the newly elected President of the Nigeria Union of Journalists, Abdul-Waheed Odusile to entrench professionalism in the industry.
A statement by NUJ’s Secretary General, Abuja Council, Emanuel Ogbeche, said the NGF chairman lamented the rising incidence of fake journalists and urged the new leadership to address the issue appropriately.
“Journalism is a worthy profession that requires proper observance of the ethics”, the statement quoted Yari, who is the Governor of Zamfara State, as saying.
It said Mr. Yari charged Odusile to “walk the talk” and justify the confidence reposed in him.
During the campaign preceding his election as President, Mr. Odusile had stated that it was necessary for the leadership of NUJ to be credible enough, and qualified to build upon current developments.
“We need the NUJ to add value to itself, not just to raise sister groups who will use the union to grow”, Mr Odusile said.
He made a succinct commitment to end quackery in Nigerian journalism, stressing the need for leaders in all media houses to possess the necessary qualifications.
“The NUJ is a body that produced a lot of other subsidiary bodies. If the NUJ is able to make itself formidable enough, it can have a voice like that of the Nigeria Medical Association, (NMA), NBA, among others”, Mr. Odusile stated.
He stressed that new entrants into the union must be properly screened to avoid quackery, adding that there was also the need for NUJ to have its own media outfit, as a source of raising funds and serving the community.

Hazard Is Back To His Inconsistent Ways At Real Madrid –...