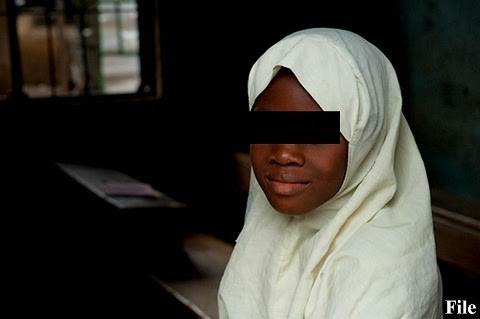 But for the timely intervention of the National Human Rights Commission, NHRC, the planned marriage between a 40-year-old man and 13-year-old primary 5 pupil of POWA Primary School, Abuja, would have taken place on Friday.
The marriage, which was billed to take place on July 24 in Abuja, was halted by the Commission after an investigation.
According to a statement by the Chief Press Officer of the Commission, the planned wedding ceremony was interrupted and the minor retrieved from her husband-to-be’s house following a tip-off.
The statement further stated that all parties involved in the planned unlawful marriage have been invited to the Commission including the groom to be, one Mr. Ibrahim, who had full knowledge that the girl was less than 18 years of age as prescribed by Law.
After thorough interrogations, the Commission cited the relevant laws to back its decision to stop the marriage, including Sections 21, 22, 23 of the Child Rights Act 2003, which prohibits child marriage or betrothal, an offence which is punishable by five years imprisonment or 500,000 Naira fine.
The Executive Secretary of the National Human Rights Commission, Professor Bem Angwe, while referring the matter to the Commissioner of Police, FCT Command for prosecution, also stressed the determination of the Commission to ensure the implementation of the Child Rights Act and its enforcement against all persons irrespective of their status or religious belief.
Earlier, Prof. Angwe advised parents and guardians to be vigilant and ensure that their children and wards are not exposed to early marriage, which he pointed out does not only offend the law but has psychological, social and health implications.

I Am Happy At West Ham – David Moyes

Tonto Dikeh Robbed Alongside Her Husband In Ghana | #Celebrity