The Catholic Archbishop Emeritus of Lagos, Anthony Cardinal Olubunmi Okogie has come out to say that Nigeria’s problems cannot be addressed by the kind of leadership we have right now. He recently revealed that the country is currently on a deathbed due to its peculiar challenges. 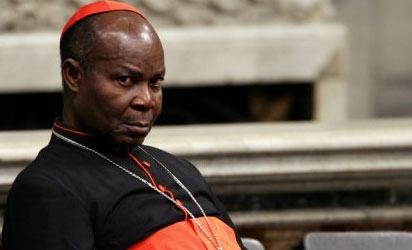 According to Cardinal Okogie, we need a change of heart for Nigeria’s 60th independence anniversary because we cannot fix Nigeria via propaganda and criminalizing expression of dissenting opinions.

He added that Nigeria is still in distress but he would keep awaiting the long-term response to our prayer.

His words, “We need a change of heart for Nigeria’s 60th independence anniversary. You cannot fix a country by using propaganda. Neither can you facilitate development by criminalising expression of dissenting opinions?”

“Close to four decades ago, during the struggle to rescue democracy from the hands of Nigerian soldiers, Nigerian Bishops composed a prayer: ‘Prayer for Nigeria in Distress,”

“Nigeria is still in distress. We await the long-term response to our prayer. Sixty years after we got our independence from Britain, Nigerians and those who love her know that this country is in dire need of redemption.

“It would be utterly dishonest and cruel to say Nigeria is in good condition. Nigeria is sick unto death. Yes, Nigeria has always been in difficulty. But that is no excuse for allowing the current state of affairs to remain. Things ought to be getting better, but getting worse.”

“Nigeria needs to be rescued from the 1999 Constitution. That Constitution sets up the government in a way that is unfair to the people of Nigeria.

“It is an irony that a foundational document such as a country’s constitution, a document that ought to facilitate and protect our land and our well-being, sets up Nigeria in a way that facilitates insecurity, poverty and insurgency.

“The poor masses of Nigeria cannot. That is why the first line of resistance to restructuring is constituted by those who benefit from the Constitution.”

Court To Determine Stay Of Proceedings On Abdulmumuni Jibrin’s Suspension

Jonathan Has Made Nigeria Proud – Buhari