In the last six days, no covid-19 complicated death have been recorded in Nigeria. According to the latest update by Nigeria Center For Disease Control, (NCDC), only one covid-19 death has been recorded so far in october 2020.

Yesterday 9th of october, 151 new covid-19 cases were confirmed in Nigeria, making the total number of confirmed cases to be 59, 992, while 51,614 cases have been discharged and 1113 deaths recorded.

Even though the rate of the novel virus in Nigeria is close to 60,000, however, with the latest reduction in number of complicated deaths by the virus, Nigeria could be said to be flattening the curve. 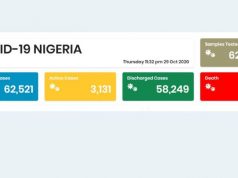 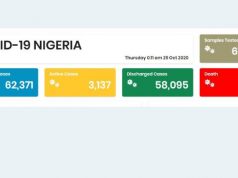