Mr. Oladapo Ibikunle took to social media to express his feelings over President Buhari’s administration and the claim that the north is bleeding under his regime.

“NORTH IS NOT BLEEDING!

“Whoever says north is bleeding should be given Nnamdi Kano and Sunday Igboho’s treatment put together!

“Ṣebí Igangan was peaceful now, were we not lying when we reported that towns were attacked back-to-back by strangers in our own homeland? NORTH IS NOT BLEEDING!

“Ṣebí EndSARS protest was incited by President Muhammadu Buhari’s enemies in the South to make the country ungovernable for a president of nothern extraction? NORTH IS NOT BLEEDING!

“Ṣebí Jonathan was clueless (of course, he actually was) and lacked military experience? Then didn’t we package old retired and analogue Major-General for digital responsibilities. NORTH IS NOT BLEEDING!

“Were farmers not lying when they said they were being killed, raped and kidnapped on their farmlands? NORTH IS NOT BLEEDING. 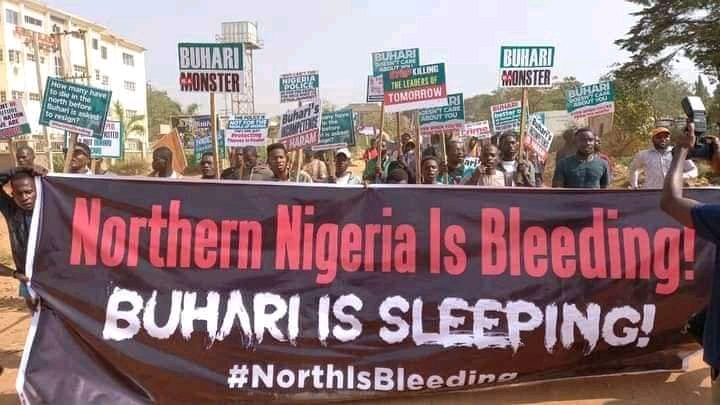 “Let all the security agencies crush any form of protest against the administration of President Muhammadu Buhari. How can his kinsmen be protesting against his good administration, when NARD, ASUU, NASU, etc are also giving him sleepless nights despite all his achievements in all sectors, especially security? NORTH CAN NEVER BLEED when his capable son is at the helms of affairs and being assisted by the likes of Lai Muhammed, Garba Sheu and our own Femi Adesina.

“How can North be bleeding when Sunday Igboho is behind bars and Nnamdi Kanu is also in DSS custody?

“How can North be bleeding when El-Zakzaky remains in custody despite multiple court injunctions to release him on bail? (The present administration understands the kind of danger he represents by giving him freedom, hence he must remain behind bars with his wife, Zinnat).

“How can North be bleeding when Omoyele Sowore is restricted to Abuja alone by court of competent jurisdiction?

“All the ‘bastards’ that can set the country ablaze are behind bars, so how on earth will the most important part of the country be bleeding.

“How can North be bleeding when it has eggheads like Sheik Gumi, Governor Abdullahi Ganduje, deposed Emir Sanusi Lamido Sanusi, Governor El-Rufai and the Almighty Professor Zulum?

“If anybody says North is bleeding, then the person is suffering from brain heamorage. North is fine, Nigeria is fine and whether you like it or not, His Excellency, President Muhammadu Buhari (GCFR) will complete his term in office as any attempt or attempted attempt to incite violence or make the present administration seem incapacitated will be met with full force of Nigerian Army, Nigerian Air Force, Nigerian Navy, Police, DSS, Civil Defence, Nigerian Immigration, Customs and even Vigilantes”

2023: I’ll continue to campaign for Tinubu – Buhari speaks amid crisis

My Son Is A Blessing From God – Bryan Okwara