Hundreds of youths under the group, ‘Saraki is coming’, from across the north on Sunday took to the Streets in Kano, insisting that the former Senate President, Bukola Saraki, must contest the 2023 presidential election. 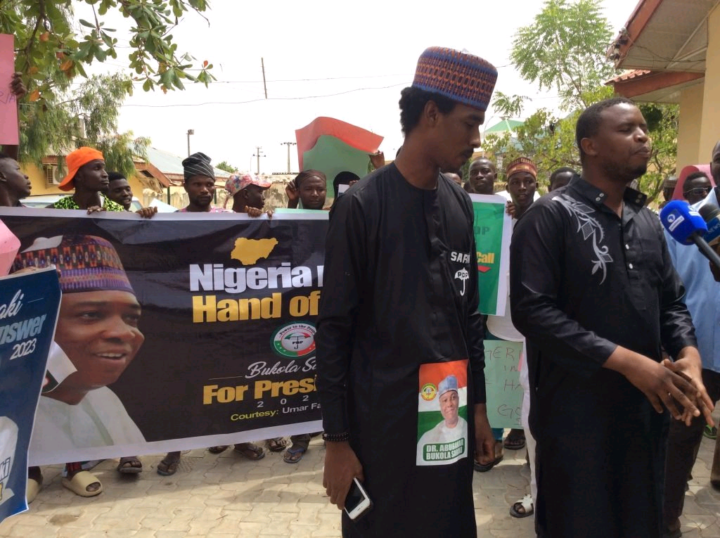 The youths, who marched from the Kano City center to the Nigeria Union of Journalists (NUJ) office along Firm Center, carried several placards with different inscriptions, “Saraki is coming, 2023”, “Saraki is the answer”.

The President of the group, Umar Farin Gado, alongside his Secretary, Saidu Sani, said during the protest that they are apologizing to Saraki for what had happened to him while serving as Senate President.

“We never knew that Bukola Saraki meant well for Us more specifically we the Younger ones, not until he left office, we were convinced to hate him for no reasons, but we have regretted it and we say sorry sir,” he said.

Gado said they are not just calling for Saraki to contest Presidency, but they are compelling him to listen to their needs and do the needful.

He said, “we are not begging, we are not appealing, but are directing that you must contest the nation’s highest political seat, come 2023, that is our needs and you have no option but to listen to us”.

The group said they will continue to pressure Bukola Saraki until he accepts their calls to contest the Presidency and they will mobilize other youth groups across Nigeria to join their march for Saraki.

The President of the group also denied that Saraki has any knowledge of what they are doing, adding, “we as Youths we are watching things with keen interests and we are convinced beyond reasonable doubts that Saraki meant good for our future”.

No Liverpool Player Is Ruled Out For Everton Clash – Klopp