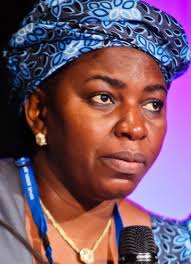 LANGTANG (Water Resources Ministry Report) – The Minister of Water Resources, Sarah Reng Ochekpe  has commenced the 2014 edition of the ‘Free Medical Outreach in Langtang North and South of Plateau State in efforts to provide medical care to the  less – privileged people of Plateau State.

Sarah Ochekpe expressed satisfaction that the project received the patronage of the three places, saying she was encouraged to extend same  to Langtang North and South LGAs. She further explained that one of the objectives of taking free medical outreach to the doorsteps of  the people is to complement the programmes of President Goodluck Jonathan,  who is also doing well in the health sector.

“I am conscious of the fact that many people in our rural areas do not have access to good medical care and are also not able to access it, due principally to the lack of finance or inability to go to places to access the medical care. So,  we are bringing the free medical care, in order to get closer to the grassroots where they are mostly needed,” she said.

“A total of five hundred and ten (510) patients with varied health challenges were attended to at the opening ceremony of the Programme. Out of this figure, 53 laboratory tests were conducted, 304 patients were attended to by general consultants and 9 general surgeries were carried out successfully.”

In her goodwill message delivered at the occasion, the Deputy Speaker of the Plateau State House of Assembly, Joyce Lohya commended the Minister for taking the  free medical care to the people of  Plateau State. She stated that just as the people had seen and described her as an Ambassador of President Goodluck Jonathan, she should be seen and described as a good Ambassador of the State.

Joyce Lohya  informed her that she has not only delivered on her responsibility towards ensuring improvement in the water sector which is her Ministry’s mandate, but has gone beyond that by providing free medical care  to the people, conscious of the fact that water is life, so also good heath is wealth. She thanked the Minister on behalf of the beneficiaries and the entire people of Plateau State, assuring her that the State Government is aware of what she is doing. “We say thank you and your medical team; we are very grateful and proud of you as our own mother,” the Deputy Speaker iterated.

The free medical outreach is a project sponsored by Sarah Ochekpe and her friends as well as SCC Nigeria Limited,  the National Emergency Management Agency (NEMA) and the Federal Ministry of Health in collaboration with the Urban Frontiers Mission International; the Association of Resident Doctors in JUTH and Afri-foundation.

Present at the opening ceremony was the member representing Langtang in the Plateau State House of Assembly, Exo Nandong Pyenap, the Deputy Chairman of Langtang North, Jonah Chir Man; the Commissioner of Health represented by Adeyinka Mathew (Dr), Katherine Uzoma (Dr), a representative from the US Project Cure,  the District Head of Pil-Gani and Nimmyel Dauda (Dr).