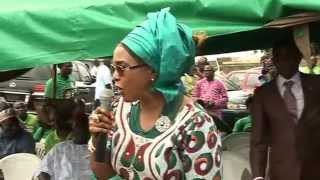 The senatorial candidate of the Peoples Democratic Party (PDP) for Ogun Central district, Dr. Bisola Sodipo-Clark, has commenced a door-to-door campaign ahead of the February election.

The chairperson of the National Eye Centre, Kaduna who is also a former Commissioner for Health in Ogun State led her campaign team to several homes in the Ibara area of Abeokuta, the Ogun State capital telling residents about her programme and thanking them for their support so far.

She promised her constituents that she would use her wide contacts to attract enviable projects that will affect the lives of the people as she did when she was Commissioner for Health, if voted into office.

“I served you before and the records are there. You remember I worked hard to ensure that most of the general hospitals in Ogun State got adequate funding that led to their establishment. I will do it even at a higher scale this time. I know who to meet and where to go to attract life-improving projects for you,” she said.

The politician also promised to ensure that a major power transformer was installed to end the pain of residents in some parts of the state capital who have been without electricity for the past three years.

“The Ibadan Distribution Company through my intervention and the support of President Goodluck Jonathan shall put smiles on your faces this new year. Your electricity shall be restored,” she said.

Jaden Smith Is Fearless – Will Smith

Okonjo-Iweala Denies Handing Over ‘Dossier Of Corrupt Deals’ Under Jonathan To...