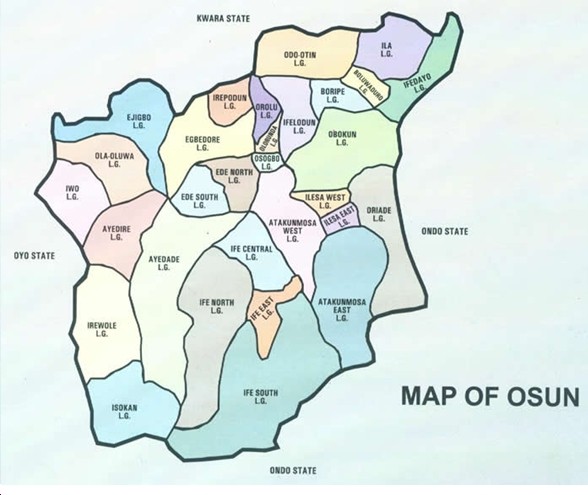 Sequel to the direction of one Mr Lanre Afolayanka, the Chairman of a non-governmental organization based in Osogbo, Osun State, the Justice Now Foundation (JNF) directing its lawyers to write the Nigerian Police and the Department of State Security (DSS) to immediately arrest and investigate the ring leader of (CSCEOS) Comrade Adeniyi Alimi Sulaiman

Who on Wednesday 20th July, penned a press statement accusing the highest disciplinary organ of the Nigerian Judiciary, the National Judicial Council (NJC) of forgery, financial inducement and outright corruption

Come to think of it, is “Justice Now Foundation” activity reserved exclusively for occasions and events that has expectations of pecuniary benefits only?

If not, Why is the JNF organisation Criminalizing a just course?

You will also agree with me that this organisation have come to defend the interest of Governor Rauf Aregbesola, and the NJC against a female judge; Justice Oloyede and civil society organisation name Civil Societies Coalition for the Emancipation of Osun State (CSCEOS), the only NGO that stood by the poor woman fighting for the masses

Where was this sets of self seeking despot parading as activist when over 200 pensioners died in Osun between January and June 2015 alone, in consequence of their cruel and inhuman treatment by Mr Governor

Was Mr Lanre Afolayanka the Chairman of the JNF out of Osun State?

When Hundreds of public servants, retirees and other categories of residents of Osun State trooped to the Winners Chapel, Osogbo, to be a partaker of the food aid sent to the state by the Presiding Bishop of the church, Bishop David Oyedepo

Was this organisation not in existence? When Senator Buruji Kashamu Donates 30 Trailers Of Rice To Starving Workers of Osun State

Isn’t all this injustice back then ought to have attracted the attention of the Justice Now Foundation to the mal administration of the Ogbeni Rauf Aregbesola led regime?

Founding Fathers of the State of Living spring, the land of Yoruba civilization and Oduduwa and fearful warlords like Ogedengbe, which has now become the butt of jokes and ridicule, an object of poverty and pity in the hand of the ‘blue eyed boy’ of the ‘Progressives’!

Oladapo,I am propelled by the desire to see the pains of my fellow Osunite ameliorated and to possibly, help take away the reproach of our State as “a bankrupt” and “a failed State”, as announced on Channels TV, by Mr Tunji Onigbinde, and the desire to join hands with other of like minds to help salvage the sinking ship of Osun State from Ogbeni Rauf Adesoji Aregbesola

It could be recalled that Mr Governor himself had admitted publicly, the fact that Osun is in financial quagmire and that he is clueless on how to pull her out of the doldrums into which she has been pushed

Freedom, Equality and Justice as enunciated at the Stockholm Conference (1942), a principle which finds expression in the preamble to our Constitution, and which I believe is a fundamental pre-condition to the establishment and sustenance of our collective dream of an “egalitarian society” as promised by Osun State’s anthem, as well as the bases for harmony, “universal brotherhood and World peace ”

Court in the land? Human Right activist in the Country? Oh, how are the mighty fallen!

Finally, I hereby charge President Muhammadu Buhari to wade into the matter by constituting an independent and unbiased panel of enquiry to show that his government is serious about the fight against corruption