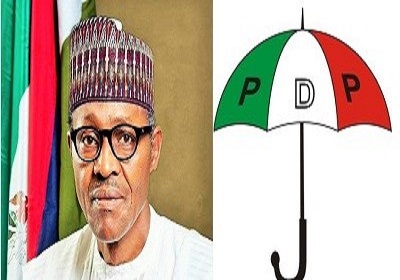 Peoples Democratic Party (PDP) has said Saturday’s judgment of the Taraba State gubernatorial election petition tribunal in favour of the All Progressives Congress (APC) candidate, Aisha Alhassan, was another evidence of executive interference in the judiciary.

The party said the reason given by the tribunal for arriving at what it termed a “bizarre” decision, is intriguing and further exposes the contradictions and double standards inherent in most tribunal rulings against PDP interests recently.

The PDP’s position was contained in a statement signed by its National Publicity Secretary, Olisa Metuh.

According to the statement, “Taraba state tribunal ruling again brings to the fore the organized plan by the President Muhammadu Buhari-led APC Federal Government to deploy all unorthodox means to decimate the opposition”.

See also  The Rule Of Law Is King - Buhari

“It is rather curious and a great conflict of irony that the Taraba tribunal sitting in Abuja on security grounds faulted the conduct of PDP primaries shifted to the same Abuja on security reasons”, the party stressed.

The PDP said if the tribunal was faulting the party’s primaries as basis for its decision, it then means that no APC gubernatorial candidate can stand the test, as their party never had acceptable primaries in any of their states.

The PDP said it had earlier alerted the nation and the international community of the grand design by the APC to use the judiciary to wrestle some PDP states, particularly Rivers, Akwa Ibom and Taraba states.

“Evidence that Taraba ruling was a product of presidency manipulation can be deduced from the fact that few hours before the judgment was delivered, the APC had arrogantly announced their victory on the new media”, it said.

PDP said it was totally confounded by the “brazen show of power by the executive and warned that the development clearly portends grave danger to our democracy and indeed national cohesion and development”.

The party, however, called on its members across the country, especially in Taraba State, to remain unshaken as the appellate courts will restore its well-deserved victory.

Life Was Difficult At Stamford Bridge At Some Point – Giroud