When Manchester City arrived at the Stadio Olimpico needing to beat AS Roma to stand any chance of progressing to the Champions League knockout stages, many wondered how they would cope without Sergio Aguero, Vincent Kompany and Yaya Toure.
.
Manager Manuel Pellegrini did not.
.
Despite boasting an enviable wealth of talent in their ranks, City have often floundered in the Champions League and ahead of kickoff in Rome on Wednesday they sat third in Group E needing a victory and Bayern Munich to beat CSKA Moscow.
.
With powerhouse midfielder Toure suspended and captain Kompany and talismanic striker Aguero injured, City’s prospects of beating Roma looked bleak.
.
But having been forced to shuffle his pack and adopt a resilient rather than graceful style, Pellegrini stumbled across a formula that worked perfectly.
.
With the attacking flair that helped them claim the Premier League title last season put to one side, City produced a gladiatorial performance that conquered Roma.
.
Samir Nasri put the visitors in front in the second half before Pablo Zabaleta’s late strike – coupled with Bayern’s victory over CSKA Moscow – ensured City reached the knockout stages.
.
Midfielders Fernando and Fernandinho epitomised City’s performance with tireless displays and three-times European Cup winner Graeme Souness hailed their effort
.
“It was a really solid European performance,” the former Liverpool midfielder told Sky Sports. “They needed to show teams a bit more respect and be a bit more cautious. City did it right.
.
“It was a very different Man City. It was forced on them and they may have learned from that. Fernando and Fernandinho, what did they do creatively? I can’t remember any clever passes.
.
“But what they did do – they were on Roma, making them make passes they didn’t want to make. You need that – at the highest level you need that.”
.
Jamie Carragher, who won the Champions League with Liverpool in 2005, believes Pellegrini has a tough decision to make when midfielder Toure returns from suspension. 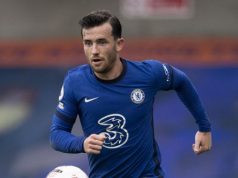 Osi Sends Out Apology On Twitter Over unclad Picture Controversy