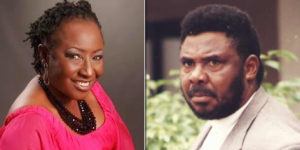 Veteran actor, Pete Edochie, is having a go at social media impersonators who reportedly used him name to activate social media accounts and ascribe invented comments to him.

He revealed the number of instances where misinformed and malicious statements were attributed to him, including rumours that his son died on a movie set.

The actor disclosed this in an interview published by Punch News on Saturday, August 13, 2016, where he mentioned that he has numerous Facebook and Twitter accounts to his name.

“Right now, I’m watching football in my house, but as I speak to you, some people are posting on Facebook or Twitter, using my name and picture.”

“It’s either they are talking about politics, state of the nation, ascribing series of proverbs to me or using my name to counsel people about marriage.”

“Someone asked me how I had time to put plenty proverbs on Facebook. I told the person I wasn’t responsible for them and that I didn’t even have a Facebook account, and she couldn’t believe it.”

“Some people said I sat with Mourhino in one of the profile pictures and that I was telling him the gods were angry with him. Then, they posted another one that Buhari came to consult with me in my shrine.”

“From time to time, you would hear or read that Pete Edochie died in London or on location. In our culture, if people wish you dead, you’d attend the person’s funeral.”

“I’m satisfied with what life has given me. I don’t envy anybody and I don’t want to be anybody. I just want to be left alone as Pete Edochie.”

Other untrue stories attributed to Edochie include having a misunderstanding with Nigeria’s Deputy Senate President, Ike Ekweremadu, who he claimed has no ties with him.

According to the actor, he has never been involved in politics, so comments linking him to Ekweremadu came as a shocking surprise.

“Somebody woke me up a few days ago and pointed my attention to what was written in my name about (Senator Ike) Ekweremadu.”

“I was surprised. I don’t know him neither do I have any issue with him. Again, few days ago, it was also posted that Federal Government needed me for something. All the nonsense people write about me, I’m not happy about it.”

“I’m not a politician, and I am not the only actor in this country. Throughout the campaign during the last general election, I didn’t campaign for anybody, yet on the social media you see people using my name to express support for one candidate or the other.”

Is It Chelsea’s Title To Lose?

Is BBNaija’s Mike Receiving More Praises Than The Winner?

Dwolla Reveals Cost of Checks for Small Businesses at $13.1 Billion, Speeds Up Bank Transfer Times to Next Day