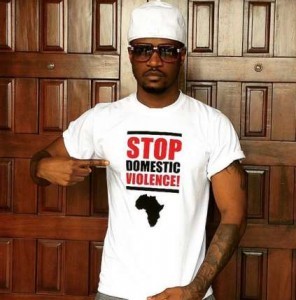 The outspoken half of the P-Square brothers, Peter Okoye, has come out to make a statement that men can also be victims of domestic abuse and violence.

In an Instagram photo shared yesterday, July 21, 2015 as part of an initiative to stop domestic violence, Peter Okoye wrote “Men can be victims too. Women are not the only victims of Domestic violence and Abuse. Men also suffer Domestic Abuse – especially verbal and emotional Abuse – and may be even more ashamed to seek help… #StopDomesticViolence #1love #MyMessageForToday” in the caption.

He also wrote “A house where a woman is unsafe is not a Home. #STOP#StopDomesticViolence#MyMessageForToday.“

Nigerians Should Prepare To Celebrate Their Freedom From PDP – PDM