The seven Nigerian men who were arrested after an attempted hijack of a UK-bound ship from Lagos have been granted bail.

The alleged culprits were earlier arrested at gunpoint on board the Nave Andromeda by the Special Boat Service (SBS).

The InfoStride had reported that the incident occurred in the British Channel off the coast of the Isle of Wight on Sunday. The hijacking, which attracted global attention, had seen the involvement of the military who stormed the ship.

The Nigerian men, who allegedly threatened to kill the crew upon discovery, were seized by the military. They were arrested on suspicion of hijacking. The offence carries a maximum term of life imprisonment under UK laws.

However, reports monitored in the UK media have it that the Hampshire Constabulary have confirmed that the seven Nigerian citizens have been bailed in relation to the criminal investigation; while investigations continue into the Incident.

Despite being admitted to bail, the alleged Nigerian hijackers remain under detention. This is in line with the UK Border Force powers in relation to their immigration status. 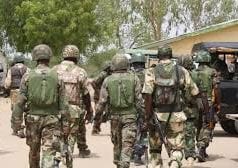 ‘The War In Taraba Will Stop Once I Become Governor’