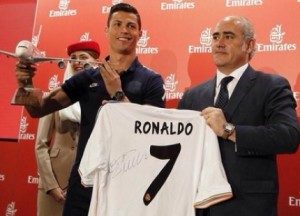 Real Madrid coach Zinedine Zidane says his side will be favourites in their upcoming Champions League semifinal with Manchester City, but his full focus for now is on Saturday afternoon’s La Liga game at suburban neighbours Getafe.

Madrid go into the game boosted by Tuesday’s comeback against Wolfsburg in the Champions League to reach the last four, with key players such as Cristiano Ronaldo looking in their best form of the season.

The Los Blancos coach told a news conference that having the return at the Bernabeu early next month was an advantage, but he does not want to be distracted from the upcoming La Liga game.

“It will be a very, very difficult game,” Zidane said. “The good thing is we play the return at home, that is always positive. But for sure it will be a big battle.

“Madrid are always favourites, and always will be. But we know how difficult it is to play a Champions League semifinal against Manchester City, but we will do our best to go through. I know the draw is the news, but I am not going to answer 10 questions about it, as most important is tomorrow’s game against Getafe.”

There are also currently growing hopes among fans and pundits at the Estadio Santiago Bernabeu that an improving Madrid can also take advantage of Barcelona’s slump in form to win the La Liga title race.

Asked if he saw similarities between Barca’s current form and his own experience as a Madrid player in 2004 — when the team in which he played was well placed but ended the season winning nothing — Zidane responded that he preferred to focus on his own players’ preparation.

“I’m not going to talk about what is happening at Barcelona,” he said. “I don’t like for a team to have a bad time, I’m just concerned about my team doing well. We cannot let our guard down, we must remain focused in our objectives. The players know what we are playing for, we have gone from 13 points to four, so now is not the moment to drop our guard.

“After the [Getafe] game we can be within one point. Then you look at what the others do. But we must think about our own game, play it well, knowing it will be very difficult.”

Getafe are currently 19th in the Primera Division table after picking up just two points and scoring four goals in their last 12 games — an awful run which lead to coach Fran Escriba being sacked this week and replaced by ex-Real Madrid player Juan Esnaider.

Madrid have won five and lost one of their last six trips to the Coliseum Alfonso Perez, but Zidane said he did not accept it will be an easy game.

I Am Still The PDP National Chairman – Ayu