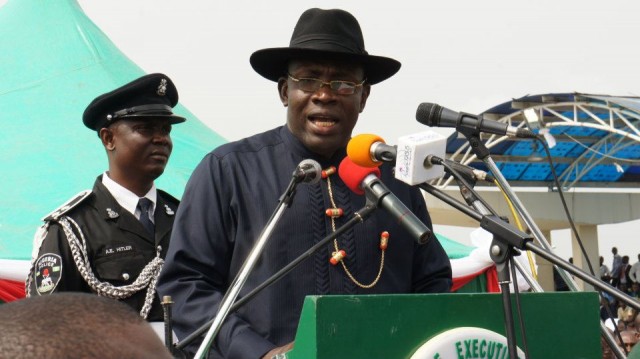 The alleged ambition of a serving Senator from Bayelsa State is heating up the polity in the state, indications have emerged.

The senator, said to be at the centre of the storm, is allegedly interested in chal­lenging Gov. Seriake Dickson in the 2016 governorship election. This is coming on the heels of a similar report linking anoth­er presidential aide, who is also believed to be inter­ested in the 2016 governor­ship race, to some unwholesome activities.

While the senator was said to be using his perceived closeness to Aso Rock to his advantage, the presidential aide on his part reportedly claimed that the wife of the president, Dame Patience Jonathan, had promised to deliver the seat to him.

As part of his des­perate measures, the senator has allegedly been intimidating core loyalists of Gov. Dickson by pulling his string of connections at the Force Headquarters, Abuja.

Already, a source said, four loyalists of the gov­ernor from Epie Kingdom have been arrested for ques­tioning by policemen sent from Abuja. The names of the arrested persons, according to the source, are Comrade Obadi­ah John, Mr. Oborku Oforji, Raymond Manifest and Aus­tin Eliot Sambo.

The senator was said to be uncomfortable that despite succeeding in breaking the ranks of pro-Dickson forces in Epie kingdom, key individuals with the much needed politi­cal clout he covets, had refused to join his camp.

The source said: “The senator is moving against people loyal to the governor using his influence at the federal level to get the police to hound these guys. What is interesting to know is that these boys are from Epie clan and he has succeeded in dividing their ranks to create two factions. He is hounding the leadership of critical groups in the clan. So, all these are part of his desperation to be governor as he continues to drop the name of the President. He is moving against the loyalists of the governor”.

The source said that the move was also aimed at co­ercing the arrested loyalists to abandon the governor and join the senator’s camp.

“This is politics of in­timidation and it has started causing crisis in the king­dom. Though he is a senator, he is very far away from his people. His people don’t like him and that is why he is intimidating them. The people he has induced their arrest are powerful in that king­dom. For instance, Com­rade Obadiah John is the Community Development Committee (CDC) Chair­man. He is also the General Chairman, National CDC Forum, Epie Kingdom and the Protem Chairman, Epie Youth. He is reputed to be in control of 17 youth groups in Epie Kingdom. So, he is very influential”, the source stated.

Messi Is A Smallpox And There Is No Vaccine – David...