Somalia’s President Mohamed Abdullahi Mohamed Farmajo on Saturday reopened talks to hold elections as soon as possible, a move welcomed by the opposition and raising the spectre of further deadly violence. 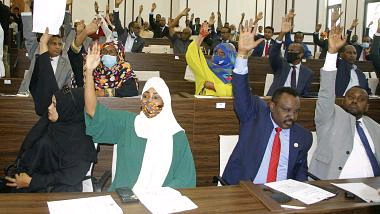 In a short speech to MPs, broadcast live on television, the president called for a negotiated solution to the ongoing political crisis, abandoning the two-year extension of his presidential term adopted on 12 April.

He also designated his Prime Minister as responsible for the organisation of the elections, thus acceding to one of the main demands of the opposition to break the deadlock.

“We have decided to seek a solution through negotiations and avoid provoking violence for the benefit of those who play with the blood of the people,” said the president, known as Farmajo.

Somalia, a country weakened by decades of civil war and an insurgency by radical Islamists affiliated with al-Qaeda, is currently experiencing one of its worst political crises in recent years.

Tensions have risen since the president’s term expired on 8 February without elections being held, and on 12 April, a two-year extension of the presidential term triggered the fury of the opposition.

The extension of the presidential term on 12 April triggered the fury of the opposition, to the point of degenerating into armed clashes last Sunday in Mogadishu, between government forces and pro-opposition, leaving three dead.

On Saturday, the president placed himself within the framework of an agreement reached on 17 September between the federal government and the five semi-autonomous states of the country, as requested by his opponents and several partner countries.

The agreement calls for elections to be held under an indirect system, similar to the one adopted in 2017, where special delegates chosen by multiple clan leaders elect parliamentarians, who then vote for the president.

“I appeal to all of you (…) to return to the inclusive agreement” adopted in September, he added.

“I want to make it clear that Prime Minister Mohamed Hussein Roble will be in charge of the preparation, conduct and security of the election,” he added.

The speech was then adopted unanimously by the 140 MPs present.

In the evening, the Prime Minister hailed before the press “a historic day” and thanked President Farmajo for his sense of “compromise”.

“We are determined to hold free, fair and inclusive elections without anyone being disenfranchised,” he said, promising to bring the stakeholders together “very soon”.

– A step forward” –
In a speech to the nation on Tuesday night, the president had already backed down and called for “urgent discussions” with Somali political actors to organise elections.

In a statement, the coalition of opposition presidential candidates against Farmajo welcomed Saturday’s developments in parliament.

“I applaud the decision of parliament to return to the implementation of the 17 September agreement. This is a step forward and whoever was involved in this decision should be congratulated for it,” said former president Sharif Sheikh Ahmed, chairman of the coalition.

See also  The day they came to kill me - Abdalle Mumin

For its part, the Turkish Foreign Ministry, a key partner of the Somali government, welcomed the MPs’ decision in a statement, hoping that it would allow the resumption of political dialogue “without delay”.

The election of President Farmajo in 2017 had raised hopes among the population, who saw in him a leader concerned with fighting corruption and determined to combat the Shebab.

While he adopted a strong nationalist stance during his term in office, to the point of breaking off diplomatic relations with Kenya and thus gaining sympathy from part of the population, the president also made many enemies.

A proponent of a strong centralised state, he has tried to influence several elections in the country’s semi-autonomous states to place his allies. The extension of his mandate voted by the parliament was perceived by many as an attempt to maintain his power.

On the other hand, the shebab have not been particularly worried during his first term, despite the martial declarations made after he came to power.

And the government in Mogadishu still controls only a small portion of the country’s territory, with the crucial help of some 20,000 troops of the African Union force in the country (Amisom).

Recognition Of Taliban Not On The Table — Russia’s Sergei Lavrov

Life Was Difficult At Stamford Bridge At Some Point – Giroud

Fighting Instructor Job at a Marine Training Institute in Nigeria

#Epidemic: Fighting Ebola “by the grace of God”