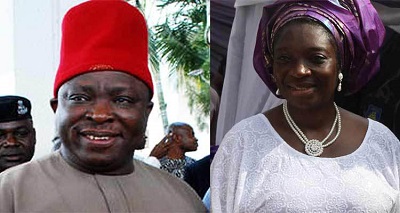 The Senator representing Anambra Central senatorial district, Uche Ekwunife, has raised the alarm over what she called un¬guarded utterances by her closest rival in the March 28 National Assembly election, Chief Victor Umeh of the All Progressives Grand Alliance, APGA.
Ekwunife in her statement made available to journalists yesterday, expressed concern over the continued utterances of Chief Umeh over the out¬come of the election, which is pending before the Election Petition Tribunal sitting in Awka, Anambra state.
The statement reads in part: “My attention has been drawn to various interviews granted by Chief Victor Umeh, my opponent in the just con¬cluded Anambra Central Sena¬torial District Election in which I emerged victorious defeating him clearly, fairly and squarely. Being dissatisfied and dis¬gruntled, he filed a Petition at the National Assembly Elec¬tion Petition Tribunal sitting in Awka challenging my victory and return as the winner. Hear¬ing in the said Petition has duly commenced and is ongoing and sub judiced.
“Rather than await the out¬come of the Petition, Chief Victor Umeh in his loquacious manner has been granting press interviews and publications claiming victory and distorting the facts of the happenings at the tribunal with the sole aim of deceiving the general public and particularly demoralizing my supporters and constituents who worked so hard and tire¬lessly to elect me as their repre¬sentative in the Senate”.
Senator Ekwunife further disclosed that the APGA candidate, through his press interviews and publications, have been trying to intimidate the judges and distort the facts before the tribunal, adding “it is however necessary to put the records straight. Chief Victor Umeh in his Petition admitted in clear and unequivocal terms that the election in all the Polling units for the Anambra Central Senatorial District held on 28th March, 2015 was free and fair and that he has all the EC8A(i) results for all the Polling Units which he tendered as exhibits without objection from my lawyers.
“However, from Chief Vic¬tor Umeh’s own calculations and computation of the Polling Unit scores in his Petition, I defeated him with 7,962 votes margin. His own witnesses in the tribunal, under the fire of cross examination from my team of lawyers equally agreed that the election was free and fair and that I won the election from the Polling Unit Results notwithstanding input errors during collation”
“His ‘expert’ witness whom he hired to manipulate figures in order to confuse the tribunal crumbled and admit¬ted under very intense and rigorous cross examination that he is not an expert in elec¬tion matters and that his reports and calculations therein upon which his petition rests were acutely inaccurate and mani¬festly unreliable. This has vir¬tually ended his Petition and put paid to all his lies and fab¬rications about the goings on in the tribunal”.

READ  Niger: We Are Doing Our Best — Bello Says As Bandits Abduct 20

The post Stop Distorting Facts, I Defeated You Fairly And squarely – Senator Ekwunife To Umeh appeared first on INFORMATION NIGERIA.

Buhari Must Be Thanked For Doing Things Differently — Nyesom Wike