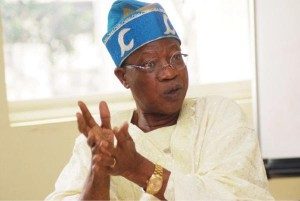 Minister of Information and Culture, Lai Mohammed has said that Boko Haram is now attempting to dominate the media space following its defeat by the Nigerian Army.

Mohammed also said that the government had recovered some treasured items belonging to the sect.

The minister made the disclosure on Tuesday, January 31, in Abuja.

“The decimated group has shifted its strategy towards dominating the media space, propagating a perverted version of Sharia law and giving the impression that it is still holding territory,” he said according to Vanguard.

“We must all unite against terrorism by denying Boko Haram our platforms to propagate its ideology. Both the media and the citizens have important roles to play in complementing our Armed Forces, which are combining land and air resources to completely clear the vestiges of Boko Haram,” he added.

Mohammed also appealed to the public and the media not to “unwittingly provide the terrorists with the oxygen of publicity that they desperately need.”

The military, on December 23, 2016, announced a victory over Boko Haram after supposedly capturing its notorious stronghold, Sambisa Forest.