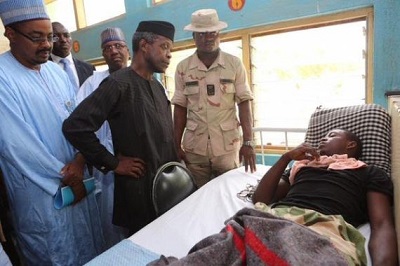 President Muhammadu Buhari on Thursday assured victims of terrorism across the country and indeed all Nigerians that there is hope for them.

Buhari’s message of assurance was conveyed by Vice President Yemi Osinbajo in Yola, Adamawa State, when he visited internally-displaced persons in the NYSC Orientation Camp and terrorism patients at the Federal Medical Centre both in Yola.

Osinbajo had since Wednesday embarked on visits to the north-eastern part of the country, which is the epicenter of Boko Haram insurgency, on the instruction of President Buhari.

The VP assured the displaced persons that Buhari would ensure that everything was done to resettle them back to their homes.

“The President asks me to say to you that there is hope, great hope. That the Federal Government under his leadership will ensure everything is done to provide for you and resettle you back to your homes, your work, your businesses and your places of worship”, a statement by the Presidency quoted Osinbajo as saying.

The vice president, however, asked the people concerned to be patient with the government.

He said patience was needed because the government “is not too buoyant”.

Mr. Osinbajo said despite the poor financial status of government the President thinks of the terror victims every day.

While commenting on the problem of unemployment and poverty in Adamawa State, the VP disclosed that his party, the All Progressives Congress, is specifically concerned with these major problems.

Osinbajo assured the government of Adamawa State that the present administration was committed to assisting in rebuilding and reconstructing affected parts of the state.

I Don’t Mind A Woman That Can’t Cook – CDQ