Tiwa Savage Is My Shawty – TeeBillz 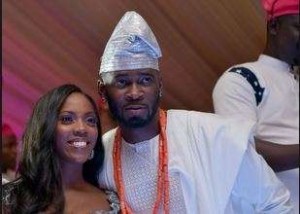 TeeBillz has revealed how he told Tiwa Savage that she was going to be the biggest female act from of Africa.

The music executive made this known via his Instagram page on Friday, August 24, 2018, where he shared a photo of Tiwa Savage and himself. According to him, she thought he was crazy for saying that and now she has sold out the O2 Arena in London for her concert.

“When I told shawty, you going to be the biggest Female Artist out of Africa’ then I said nah’ One of the best five out of Africa…. she looked at me and said you’re Crazy! How?……… Exactly how you sold out #o2Arena today!!! #Proverbs323 Congratulations Mama J. #Blessings❤️ #JourneyofaThousandMiles #TheSavageTour #FbF,” he captioned the photo.

Looks like TeeBillz’ relationship with Tiwa Savage has improved over the last few months as he has via his Instagram page been seen posting nice comments about her. Recall a few weeks ago during their son’s birthday, he revealed how he has been a source of joy to Tiwa and himself.

The Square: The Human Story Behind the Egyptian Revolution