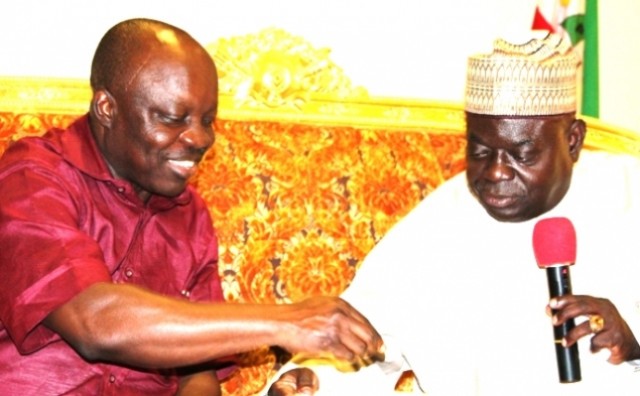 Governors Emmanuel Uduaghan of Delta and Babangida Aliyu of Niger have restated their faith in the Peoples Democratic Party (PDP), saying that the party’s worse days were over.

Speaking in Asaba, the Delta State capital, the governors conceded that the party indeed had stormy times of late but that calm had returned and the PDP is now better repositioned to win the 2015 general elections.

According to Uduaghan, who played host to his northern counterpart and members of his team, “our party is now stabilised, people are happier and we are more united in the PDP”, adding that Aliyu took a wise decision by not abandoning the party during the crisis.

“You kept saying and reassuring us that you are a PDP man for life, some people do not believe in running away from challenges and you are one of them. The answer to challenges is to remain inside, tackle the challenges and effect the changes you desire”, Uduaghan told his guests.

The Delta State governor described his Niger State counterpart as a unifying factor, citing his strategic role as chairman of the Northern States Governors’ Forum (NGF), assuring that Nigeria will remain one indivisible entity.

In his response, Gov. Aliyu had said Nigeria will witness a peaceful election in 2015 and the PDP will remain strong and victorious in the elections.

According to him, “2015 will come and pass peacefully and it will be to the success of the PDP”, adding that the PDP was at the grassroots and the people at that level were fully in support of the party.

Aliyu expressed satisfaction with the roles Governor Uduaghan was playing in the PDP, noting that his take on issues has saved the PDP from crisis and his knowledge and wisdom was an invaluable asset to the party.

See also  The Electoral Act Must Be Reviewed Immediately – PDP

“I am impressed with what you are doing in Delta State especially with your infrastructural development”, Governor Aliyu said, adding, “despite the state’s oil revenue and oil wells, Governor Uduaghan is diversifying the state economy through the Delta Beyond Oil initiative and this is very proactive for the state and the country”.

Appointment Of Next EFCC Boss Must Be A Credible Process – NEF

We Have Broken Another Nollywood Record – Mo’ Abudu