Home West African News Nigeria News We Are Not Unaware Of The Enormity Of The Challenges Facing Nigeria...
Facebook
Twitter
WhatsApp
Email
Telegram 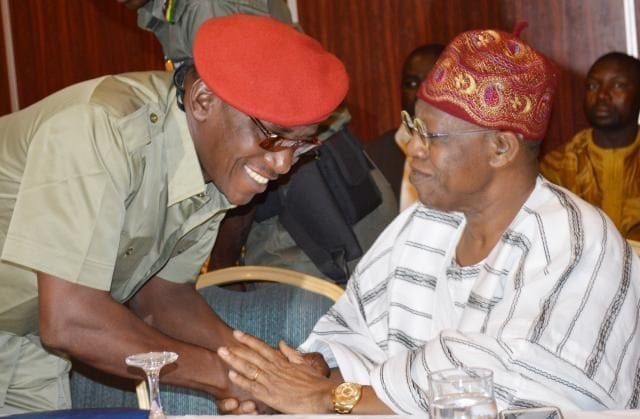 Lai Mohammed has described the letter by former president Olusegun Obasanjo to President Muhammadu Buhari not to seek re-election as a distraction.

He said “We believe that Chief Obasanjo, because of his very busy schedule, may not have been fully availed of developments in the government’s efforts to revamp the economy, which was battered by the consequences of over-dependence on a commodity as well as unprecedented pillaging of the treasury,” the minister said.

“Today, most of the indices by which an economy is measured are looking up. Permit me to say, however, that Nigeria would not have exited recession through a mere order or if the Administration had not made use of ‘good Nigerians’ who could help.

“This Administration is not unaware of the enormity of the challenges facing the nation, but we are up to the task. We have taken the bull by the horns, and long-suffering Nigerians will begin to experience a new lease of life as our efforts yield fruits. We will not go into a state of funk for whatever reason.

“On the Herders/Farmers’ clashes, this Administration is determined to end the crisis resulting from this once and for all, not minding the fact that the clashes predate us. we urge Nigerians to have faith in the Administration’s ability to resolve the crisis, and to watch out for concrete measures in this regard.

“On whether or not President Muhammadu Buhari should run for another term, it is true that many Nigerians have been calling on the President to run again, while others are opposed to his return. However, we believe this issue is a distraction for the President at this time.

READ  Okowa Rejoices With Atiku At 74

“This is because Mr. President spends every waking hour tackling the enormous challenges facing the nation, most of which were bequeathed to his Administration by successive past Administrations. He is committed to fulfilling the mandate given to him by Nigerians in 2015. And that’s where we are right now!

“Finally, we have no reason to believe that former President Obasanjo has any motive beyond the well-being of the nation in issuing his Special Press Statement. We have also taken his admonition in good faith, and we thank him most sincerely for taking time off his busy schedule to pen such a long statement,” the statement added.

Governor Yahaya Bello Has Made Kogi A Poverty State – Group

Kidnapping in Nigeria: How Common is Teen Abduction? [VIDEO]