Home Sports We Will Not Make It Easy For Those That Want Us Out...
Facebook
Twitter
WhatsApp
Email
Telegram 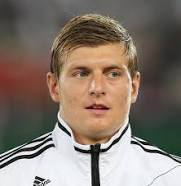 Toni Kroos has said his dramatic late winning goal against Sweden will upset many of Germany’s critics at home whom he believes were rooting for die Mannschaft to be eliminated from the World Cup.

After falling behind early on Saturday, Germany were staring at their first-ever group-stage exit at a World Cup, but Marco Reus got a goal back just after half-time and Kroos made their task of advancing much easier when he curled a shot home from a set piece in the 95th minute to seal a 2-1 win.

Germany had been inundated with criticism after losing to Mexico in the opening match, but Kroos was pleased to make those who doubted him and his teammates wait for any vindication.

“I had the feeling that a lot of people would be happy in Germany if they eliminated us, but we are not going to make it so easy for them,” Kroos told reporters after the game. “We will not be sent to the streets easily.”

Kroos also took the blame for allowing Sweden to take the lead in the 32nd minute, as he gave the ball away and then was marking Ola Toivonen on the counter-attack but allowed the Sweden forward to run in behind him to score.

But Kroos also thought he made up for it in the end.

“Sweden’s first goal is my fault, I assume the responsibility, but it was fixed by the end, right?” he said.

Kroos was heavily involved as Germany pushed for a winner, completing 15 passes after Jerome Boateng was sent off — as many as Sweden’s entire team in that time. Overall, Germany also completed 86 percent of their 744 passes, with Kroos completing 117 of his 128 — the second-most completed by a player in Russia this month.

READ  Traffic Almost Made Me Miss My Debut - Henderson

“When you touch the ball 400 times per game, it’s normal that you can lose the ball a couple of times,” he said. “Anyway, I accepted my fault.”

EPL Will Be Tough For Conte, Pep – Klopp