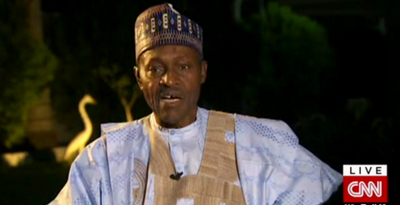 Newly elected president of Nigeria, Gen. Muhammadu Buhari (retd.) on Wednesday promised to aggressively fight corruption and give rapid attention to the problem of insecurity in the country.

The president-elect, who made this known in an interview with CNN’s Christiane Amanpour from Abuja yesterday, said he would tackle the lingering issue of insecurity in the Northeast, which is the epicenter of an ongoing military campaign against Boko Haram by cooperating with neighbouring nations Chad, Cameroon and Niger.

Mr. Buhari, who defeated incumbent President Goodluck Jonathan, also accused the PDP-led federal government of doing too little, too late in the war against insurgency.

He, however, promised that within two months of getting into office, the threat of Boko Haram will be effectively dealt with.

He said: “We know how they started and where they are now and we will rapidly give attention to security in the country. And I believe we will ef­fectively deal with them in two months when we get into office. We will be needing the cooperation of neighbour­ing countries such as Cam­eroon, Chad and Niger. There were efforts made by the President Goodluck Jonathan administration, but it was not good enough and it came rather late.

“We expected the Federal Gov­ernment four years ago to sit down with these coun­tries and make sure they do not allow the terrorists free movement across bor­ders, training facilities and movement of weapons. These were only done a few months ago and we have seen how Cameroon, Chad and Niger are fighting Boko Haram more than Ni­geria is doing until recently. Really we have seen enough and we have enough law enforcement to face Boko Haram squarely”.

READ  We Will Fight Corruption, Insecurity In 2021 — APC Governors

On the military’s initial lackluster performance in the counter-insurgency war, Buhari, who is a retired army general and former head of state, said Nigerian troops did not perform to their globally-acclaimed reputation because of corruption in the system

“They will…if you re­call, the Nigerian soldiers out of all ethical expecta­tions were granting inter­views to foreign journalists, saying they were being sent to fight terrorists without proper weapons. And then the National Assembly attempted to conduct a hearing to find out how much money was approved for training and weapon in the last three years but that hearing was scuttled by the administra­tion”.

Mohamed Salah Is Loving And Loyal To His Homeland – Khaled...

World Moto in Discussion With 4 Motorcycle Manufacturers to Appear at...