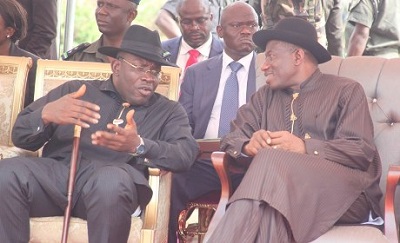 Governor Seriake Dickson of Bayelsa State has predicted victory for President Goodluck Jonathan in the 2015 presidential election because of his scorecard and credibility.

This is just as he called on Bayelsa residents to pray for leaders of the state and Federal Government to overcome the difficult circumstances the administration had been passing through.

A statement on Tuesday by the governor’s media aide, Daniel Iworiso-Markson, said Dickson made the call in his message to the people of Bayelsa at the last edition of the state’s monthly praise night at the King of Glory Chapel, Government House, Yenagoa.

The statement quoted the governor as saying that “President Goodluck Jonathan will emerge victorious at the 2015 elections because of his scorecard and credibility.

“With constant prayers from Bayelsans and leaders at all levels, he (Jonathan) would emerge victorious because God answers prayers.

“Nigerians should pray for the leaders of the state and the Dr Goodluck Jonathan-led federal government to overcome the difficult circumstances the administration is going through”.

Dickson, while wishing Bayelsans a Merry Christmas and a prosperous crisis-free 2015, prayed for security and peace across the land and unprecedented progress and development in Bayelsa in the New Year.

“I thank God for his mercies for the state, the crises-free election and tremendous level of infrastructural development across the state”, he said.

The governor also commended the Peoples Democratic Party in the state for conducting rancour-free party primaries and called on all registered voters across the state to collect their permanent voter cards, noting that over 75 per cent of voters had already collected their PVCs.

Earlier, in his sermon titled “the power of praise for divine turn around”, Chairman of the Bayelsa State chapter of the Christian Association of Nigeria (CAN), Most Rev. Israel Ege, admonished Bayelsans to fear God and praise Him as that will turn around every negative situation the state is passing through.

Chelsea March Towards The EPL Title

We Were All Born With Different Dreams – Ronke Oshodi Oke