Why Jonathan Will Win Presidential Election In February – Brookings Instituion 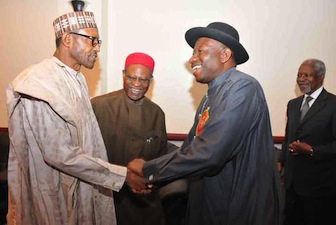 A US-based policy think-tank, the Brookings Institution has rated President Goodluck Jonathan as favourite to win the February 14 presidential election.

In a report by the institute, published under the Africa Growth Initiative with the title: “The 2015 presidential elections in Nigeria: The issues and challenges,” Brookings said Jonathan’s Peoples Domocratic Party (PDP) was more likely to win the February election.

The paper, authored by Jideofor Adibe, a Senior Lecturer at Nasarawa State University, dwelt on several aspects of the Nigerian election. It noted that “though the election is expected to be very competitive, the odds still favour President Jonathan.”

Brookings juxtaposed the two main political parties, the PDP and the All Progressives Congress (APC), highlighting their strengths and weaknesses before concluding that the APC will be unable to unseat the PDP in the February elections.

“After suffering a wave of defections to the APC last year, including five of its governors, the PDP seems to have rebounded strongly. In the battleground South-West, for instance, the party won recent governorship elections in Ekiti State and got the governor of Ondo State to defect from the Labour Party to the PDP.

“The party is especially strong in the South-South (where Jonathan comes from), the South-East and among Christians in the North. Again, while the PDP remains weak in the Muslim North, it has gained new influential members who decamped from the APC including the former governors of Kano and Borno States. And, of course, the PDP has power of incumbency.

See also  Atiku Is Trying To Belittle The Judiciary - Presidency

“Furthermore, of the 36 states in the country, the PDP has 21 governors while APC has 14. The PDP also holds comfortable majorities in both the House of Representatives and the Senate.

“APC gets much of its strength from tapping into Jonathan sentiments in the Muslim North and grievances among the Yoruba who feel that the Jonathan administration has ignored them in key political appointments,” the report stated.

I Did Not Demolish Mosques When I Was Governor – Peter Obi