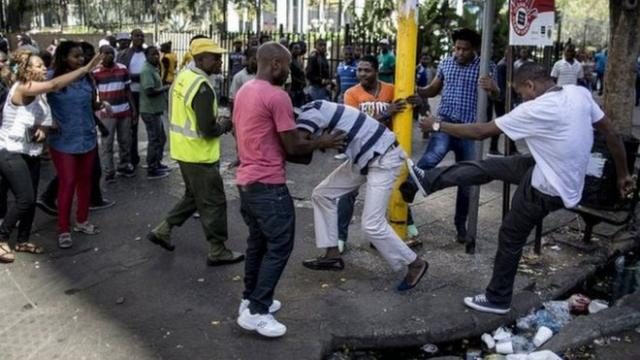 House of Representatives in Nigeria recently voiced out about the (Xenophobia) killing of Nigerians, the looting and burning of their shops and offices in South Africa after a fresh xenophobic attack on foreign nationals in SA, saying it has to stop.

A lawmaker representing Obio/Akpor Federal Constituency in the House, Hon. Kingsley Chinda revealed that the attack on the people was a threat to Nigeria.

In a recent statement, Leader of the House, Hon. Alhassan Ado Doguwa also shared that the killing of Nigerians by South Africans was not only sad but barbaric as well, and the Parliament must do something urgent about it.

His words, “What is happening in South Africa is truly a very sad and barbaric development. It is unAfrican. It doesn’t show any bonds of brotherhood. We recall Nigeria’s generous assistance to South African that helped to end the apartheid regime. The mass killing of Nigerians and the looting of their shops and offices show crudity. It doesn’t depict any form of civility.

“It is (Xenophobia) not how to show gratitude. It is against this background that we say enough is enough. We can’t continue to tolerate the killing of innocent Nigerians in South Africa. We condemn it in its totality.

“The National Assembly must rise to its responsibility. We must provide a global voice for our people who are being humiliated for no just cause. Enough is Enough.

“The Speaker of the House of Representatives, Rt. Hon. Femi Gbajabiamila is right now in consultation with the Principal Officers and leaders of state caucuses to consider cutting short our recess and recall the House in order to discuss this (Xenophobia) all-important matter.”

He continued, “I call on the leadership of NASS to reconvene the Assembly immediately. Our citizens are killed and our nationhood threatened impuniously by South Africans.

“We must take a clear position and urge the relevant agencies of government to act. It is smacks of responsiveness and irresponsibility on the part of the government to stay for 1 hour and do nothing while defenceless Nigerians are gruesomely murdered in a foreign land without cause.

“Both as a nation and as individual Nigerians, we made a sacrifice for the independence of South Africa from minority white rule. Nigeria spent her money, boycotted international events, Nigerians carried the crusade against apartheid to all parts of the world at their own cost. We accommodated South African leaders. There is no justification for South Africa to show such unconscionable attitude and devilish ingratitude to Nigeria.

“As parliamentarians, we will be failing in our duty if we do not act promptly. We must call off the recess now in the overriding public interest. It’s a matter of extreme urgent public importance that we reconvene the Assembly now”

Love Is Sweet When Its With The Right Person – Femi Adebayo

What’s the Word: How Does Office for iPad Stack Up?

STARZ Is Accusing Me Of Leaking My Own Show – 50 Cent