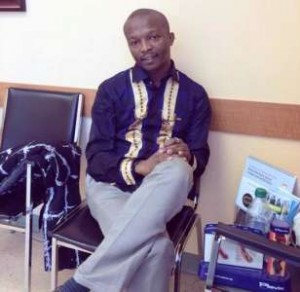 I reported days ago that Nollywood actor, Yul Edochie has accused a certain young man of stalking him for s*xual favors.

Following Yul Edochie’s allegation on the Canadian based male nurse, Steven Ugochukwu Onyebuchi; the Nurse has denied the allegations.

Denying the stalking-tale, Steven insisted that he was merely helping the actor to facilitate the relocation of his family to Canada.

“THANK GOD FOR MY PARENTS AUNTIES MY PASTORS. THERE ARE REASONS ONE DO TINZ IN LIFE. I KNW D SALARY STANDARD OF THIS ACTORS N ACTRESSES. AM PRIVILEGED TO KNW ALL OF THEM THERE. I V SIGNED MANY PPL FOR DIS MPNP (APPX 8), FOUR HAS CAME HERE AS A PERMANENT RESIDENT, ANY MOMENT FRM NOW TWO WILL. IMMIGRATION TOLD ME THAT I SHLD STOP SIGNING TILL ALL I SIGNED COME. I TOLD HIM N I STARTED LOOKING FOR A FRD WHO WIL SIGN D DOCS; IS VRY DIFFICULT TO SEE SOMEONE WHO WIL SIGN A DOC IF HE OR SHE DID NOT KNOW D PERSON. I PAID 400$ TO A FRD WHO AGREED TO SIGN HIS.”

Narrating his side of the tale further, he wrote: –

“ME AND YUL EDOCHIE IN LOVE WAR. DUDE V ME ALL HIS DOCUMENTS TO PROCESS VISA FOR HIM N D FAMILY. ACCRD TO HIM, HE SAID THAT THEY TRIED GERMANY IN 2009 AND IT DIDNT WORK OUT. WONT SAY MUCH, WE WERE CLOSE FRIENDS BT IT DIDNT WORK OUT WHICH WAS CAUSED BY HIM. THEN NOTICED I V IMPORTANT DETAILS OF HIM AND START PUTTING ME ONLINE. I DONF WANT TO BLAST HIM ON NET BECAUSE OF ONE THING. LOVE COVERS ALL. PLS IF U R A BLOG WRITER FOLLOWING ME; DONT PUBLISH. AM A PSYCHO, YET U V ME UR DOCUMENTS TO GV TO A VISA AGENT. AM STILL WAITING FOR HIM TO CALL THE NAME OF THE VISA AGENT OR BERA SAY SHOW MY DISCUSSIONS WITH THE VISA AGENT. PLEASE THANKS.”

Buhari Must Be Cautious With The Military – GEJ

City Entrepreneur Selected as the Founding Curator for the Chandigarh Hub...