A Forum of former Chairmen of the Peoples Democratic Party, PDP, in Enugu State has lambasted some Enugu West stakeholders over their recent meeting where they kicked against what is said to be an existing zoning arrangement in the State.

InfoStride News had reported that some stakeholders from Enugu West Senatorial zone had in a communique within the week said they were not aware of any zoning arrangement, and that the zone must produce the next governor of the State.

But reacting, the ex-Chairmen in a communique issued after their meeting, said Governor Ifeanyi Ugwuanyi remained the leader of the party in the State and should not be distracted at this point with issues of zoning.

This is also as they accused those behind the Enugu West Stakeholders’ meeting of forging the signatures of some of their members.

They also passed a vote of confidence in the Governor.

The communique signed by several members of the Forum read:

“Rising from the state executive meeting of the forum of former PDP LG chairmen of the State which comprised all the local government chairmen who served the party from 1998 till date, who are still members of the party and loyal to the party and its leadership under His Excellency Rt. Hon. Dr. Ifeanyi Ugwuanyi (Gburugburu) and Hon. Augustine Nnamani, we deliberated and resolved as follows:

That we the undersigned members of the PDP former chairmen of Enugu State, has been operating under one leadership at the state level under the able coordination of Chief Albert Eze and Hon. Joe Ani who has not at any time authorized any of the senatorial zones of the State to issue any communiqué, press release or whatsoever on its behalf nor has any zone the right to usurp the authority of the state exco to use its name, or letterhead to issue any press release.

While we appreciate the expression of commendation and appreciation of the good works of His Excellency, the governor of Enugu State Rt. Hon. Dr. Ifeanyi Ugwuanyi in the purported communiqué, we observe that the ground upon which the communiqué emanated was faulty, misconceived and a smokescreen intended against the major trend of peaceful politics of Enugu State which is loyalty to leadership and observance of zoning, especially as it concerns the governorship position come 2023 in Enugu State.

The associations wish to join all peace loving stakeholders of the party, elder, past and present elected members of the party, appointees of the state government, the royal fathers, clergy, captains of industries, workers and traders in Enugu State to appreciate the governor for the peace and development at the cities and rural areas, thanking him for his resilience, commitment and sacrifice.

To further deepen the existing peace and good governance in Enugu State, the association of former PDP chairmen of Enugu State reaffirm our unflinching, unwavering, resolute and complete support to the Enugu State government led by His Excellency, Rt. Hon. Dr. Ifeanyi Ugwuanyi, all the Federal representatives of our great party at Abuja who has not only distinguished themselves with robust representation at the red and green chambers but has remained the tripod upon which the peace mantra of the state firmly stands. We all will keep faith and resist every temptation which could scuttle all the peace efforts.

The association expressed deep regret for the unnecessary interjection made against our hand working local government council chairmen across the states who extolled the governor’s leadership style and performance through coordinated press releases and communique with their party chairmen in their respective local government areas.

The association wondered the intent of such attack where the few former party chairmen decided to shade the council chairmen for expressing their opinion in line with their belief that the governor should enjoy the liberty to go with the popular view of their people about issues of good governance and zoning in the politics of the state as it had been.

That we note with utter displeasure and surprise the hidden agenda that must have informed the exclusion of some former party chairmen from Enugu West in the alleged meeting held at Awgu LGA and the inclusion of former Oji River PDP party chairman’s name Mr. Pius Azor whose name they wrote as Pius Azi and forged his signature in a meeting he neither attended nor gave approval for.

The association cautioned that the citizens of the State will be against any group or individual who will threaten the existing peace in the state under any guise or actions. It therefore states unequivocally that there is no splinter unit of the association and urged the authors of the circulating communiqué from Enugu West on social media to withdraw same while advising the public to discountenance with the overzealousness of the group which only intended to mislead the public.

The association wishes to use this opportunity to encourage the governor to continue to advance the good governance it has sworn to give to the good people of Enugu State by extending the democracy dividends to the areas it has not reached and do all it can within the limited resources available to it to create enabling environment for private investors who will drive both employment for the youths and development. We also encourage His Excellency to continue with the security strategies and architecture which has made Enugu State the safest state not only in the south east but in Nigeria as at today.

The association unanimously assessed the performances of the governor in the past six years and passed a VOTE OF CONFIDENCE in His Excellency Rt. Hon. Dr. Ifeanyi Lawrance Ugwuanyi (Gburugburu), the Executive Governor of Enugu State, the State Chairman of the party, Chief Hon. Augustine Nnamani (Ozoigbondu) and all our Federal lawmakers at the Senate and the House of Representatives.

Finally, we view the recent discussion about zoning as a distraction to the working Governor of Enugu State who still has two years to concentrate on giving services to Ndi Enugu, while we remark that all elected positions so far in the state benefited from zoning.

Our belief, therefore, is that all benefactors will support the Governor at the appropriate time to ensure that the Zone whose turn it is to produce the next governor will emerge peacefully to continue after him.

While thanking God for the gift of the most humble, humane and diligent servant leader in the State, we urge all citizens and residents of the State to uphold civility and not abuse the peaceful disposition of that servant in authority that peace may continue to reign in our dear State.” 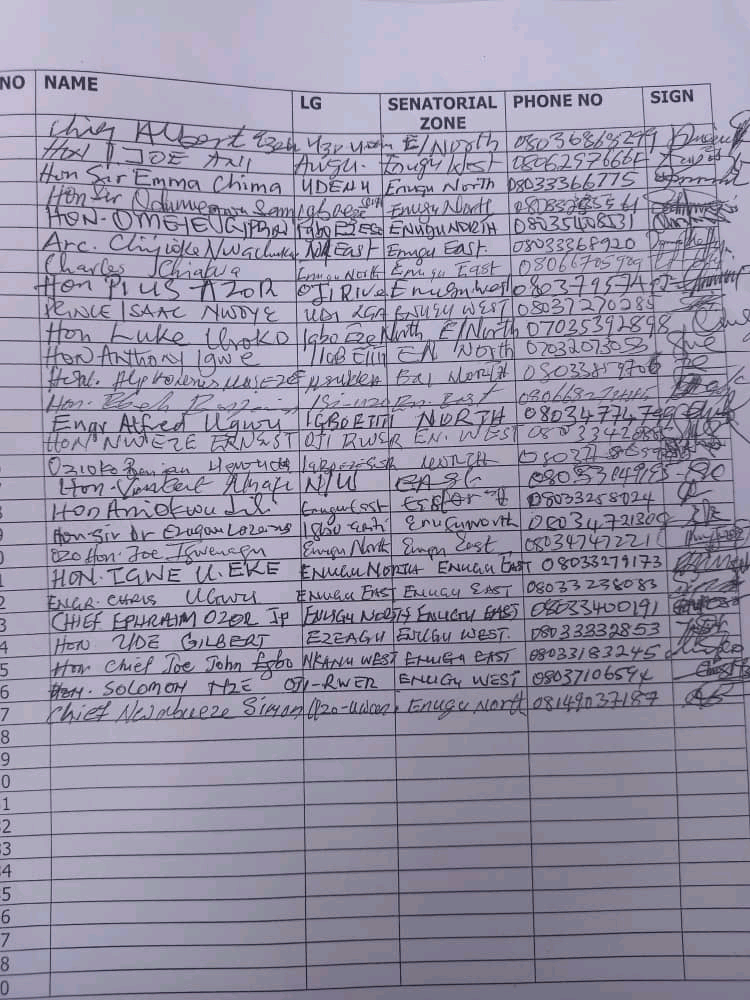