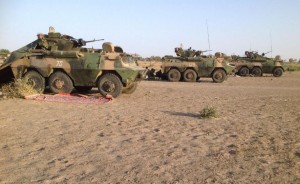 “We regret nine dead and 21 wounded. On the enemy side: more than 200 deaths…,” AFP quoted a statement said in reference to clashes on Tuesday, as saying. The statement added that the toll could rise since clean-up operations in the Nigerian town of Gamboru were continuing.

Chad sent ground troops into Nigeria for the first time on Tuesday, as the regional effort to end Boko Haram’s five-year insurgency continues. Chadian warplanes struck Boko Haram positions in Nigeria’s northeast for about an hour, clearing the way for ground troops to enter, as armoured vehicles rolled across the bridge linking Fotokol town in Cameroon with Gamboru in Nigeria.

The recent air strikes by the Chadian forces, which raised fears in some quarters that Nigeria’s territorial integrity may be compromised, was carried out after the Nigerian military’s authorisation, it has emerged. The ground troops had stoodby in Cameroon, awaiting authorisation to operate on the ground in Nigeria.

About 2,000 Chadian troops had crossed into Nigeria by midday without a shot being fired, according to an AFP correspondent.

The Islamists “entered this morning,” a Cameroonian security source tolf AFP, after Chadian troops retook the Nigerian town of Gamboru just across the border. “Fighting between them and our soldiers is really intense.”