Half Of A Yellow Sun author, Chimamanda Ngozi Adichie, reacted the decision by the Nigerian Video Films and Censors Board to halt certification of the movie based on her respective book. The celebrated author tagged the recent actions by Nigerian censors as unreasonable and disappointing.

Chimamanda shared her views in an article, ‘Hiding From Our Past’, which was published in The New Yorker Magazine. She was surprised that the censors delayed the release of the movie motivating their decision that it “might incite violence in the country”.

“I find this absurd – security operatives, uniformed and alert, gathered in a room watching a romantic film – but the censors’ action is more disappointing than surprising, because it is part of a larger Nigerian political culture that is steeped in denial, in looking away,” Chimamanda wrote.

However, the author found some sense in the censors’ action, despite calling it “a knee-jerk political response”. She agreed that Nigeria is on edge, with upcoming elections that would be fiercely contested, religion and ethnicity increasingly politicized, and Boko Haram committing mass murders and abductions. 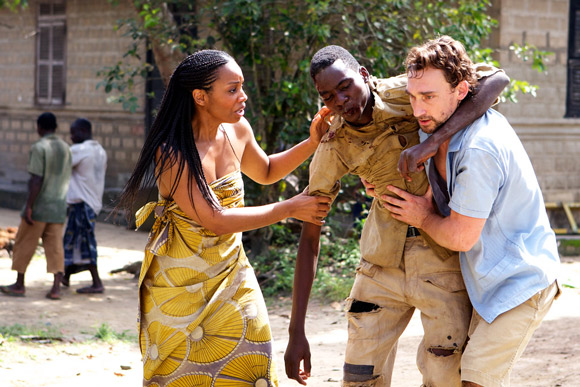 * Screen capture from the movie ‘Half Of A Yellow Sun’

But Chimamanda further reminded that both the book and the movie are about history, and we cannot hide from it.

“Conspiracy theories thrive. Soldiers are hostile to video cameras in public. Officials who were yesterday known as thieves are widely celebrated today. It is not unusual to hear Nigerians speak of “moving forward,” as though it might be possible merely to wish away the unpleasant past,” the writer continued.

She emphasized on aesthetic aspect of the film, brilliant acting by Chiwetel Ejiofor and Thandie Newton, great work by the film Director, Biyi Bandele.

“Nigerians are sophisticated consumers of culture and, had the censorship board not politicized the film by delaying its release, I suspect that few people would have objected to it at all,” Chimamanda concluded.

Therefore, the cinema release of ‘Half of a Yellow Sun’ in Nigeria remains postponed due to the fact the National Film and Video Censors Board has not certified the movie yet. The release date will be announced once the Board has certified the film for release to the public, but nobody can give exact dates, or even make predictions.

READ  Making Out With Kiddwaya Was Not Planned – BBNaija’s Erica

It would be noted that Chimamanda Ngozi Adichie’s most recent novel, ‘Americanah’, won the 2013 Chicago Tribune Heartland Prize for fiction and the US National Critics Book Prize for fiction. Her novel has also topped the list of Best Books by the BBC 2013.

Hornbill to Talk Collaboration and Engagement with Business and IT Leaders...