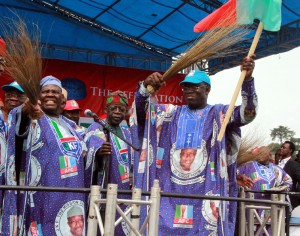 For ten straight weeks on this column, I have done nothing else besides predicting, from what as a trained historian ,I know of its decade and a half stranglehold on Nigeria, what the PDP  would be up to in the run down to the Ekiti election which they, from Abuja to Otueke, see as the opening chapter of  President Goodluck Jonathan’s consuming 2015 ambition for which nothing is considered too sacrosanct  to give and that includes the very survival of Nigeria. I wrote about the role of the first lady in Fayose’s emergence, allegedly claiming  that he is the only one with the ‘craze’ to deal with a stubborn Ekiti people as well as the recruitment  of some ‘billionaire’ political jobbers both of  which accounted for the emergence of Fayose and Omisore as governorship candidates in Ekiti and Osun respectively. As a result of that imposition in Ekiti, 18 chieftains of the party, in an advertorial in THIS DAY of Wednesday June 11, 2014  disowned

Fayose claiming that  with ‘his questionable antecedents, and for not possessing  the required temperament, disposition, and the capacity to deliver good government to Ekiti,  they cannot, in good conscience, work for him’.  Among them are Chief Ojo Falegan, Dr Bode Olowoporoku, Rt. Hon Kola Adefemi, Otunba Reuben Famuyibo, Ropo Adesanya, Chief Dapo Alibaloye, Sir Kayode Otitoju and Justice Edward Ojuolape (RTD)

I interpreted the involvement of a Niger Delta militant, as coordinator of their  South West  security strategy, not only as a cheap sellout  of Yoruba people to a tiny Ijaw nation, but as the most direct evidence of their plan to import  Niger Delta  thugs.  Hundreds of such thugs were infiltrated into Ekiti on the occasion of the President’s visit on Saturday 7 June when he primarily came to commission the  war already  promised by his Vice.  Dozens  of them were  allegedly arrested by security operatives at Fayose’s Spotless Hotel  on June 10 as reported in the IROHIN ODUA edition of June 11, 2014.  On interrogation they claimed Fayose invited them for ‘strategic reasons’ as they were paraded with their  charms, arms and ammunition.  This is, of course, a mere tip of the iceberg, as the dangerous  Southwest PDP cabal, among them ministers, have promised to capture Ekiti. Here truly  must be the changed Fayose which Jonathan said he was presenting Ekiti  on Saturday, 7 June, and upon whose victory, which God forbid, he will now develop the state. Hogwash!

President Jonathan on that day flagged off  another of his many wars as in  the  North East, Rivers, and  freshly,  Kano and  his Vice stayed behind to personally observe the commencement of  their  one-sided hostilities. Since it has become known that the likes of Yuguda were hankering after his job,  that  man of the permanent  overflowing babariga, would do just about anything to survive.

Ekiti people did not have long to wait. With the intent to ‘shock and awe’, they started with the state governor, Dr Kayode Fayemi, who was tear gassed and shot at, as they broke up a peaceful rally. But if they thought we can be intimidated then they don’t know the doughty Ekiti with a checkered history of confronting, and defeating foreign invaders. Fortunately, the governor showed that minion something of the Ekiti make-up on that day. The foreign legion was, appropriately, led by an  Ijaw police officer, one Gabriel  Selenkere,  the state MOPOL Commander,  who  was alleged to have served as Jonathan’s ADC when he was Deputy Governor in Bayelsa.  Apparently, the man  who most probably  does  not take orders from the state  Police Commissioner  had  impudently told the latter when confronted by him: who? Which governor? I know no governor when the Vice President is still around. I have orders from above’.  If I may ask of this impertinent man,  what federal project was his Vice President waiting behind to commission in Ekiti ? That, incidentally,  is what Nigeria has been turned to by these  cretins.

But all  that is only the opening glee as there are worse lined up for election day in the state. As it happened in 2003 when a substantial part of Fayose’s votes  were allegedly  ferried in to Ekiti from  the amala empire in Ibadan; the reason Baba chose whatever contract in Ekiti suited him,  they intend to have police men and thugs escort stuffed ballot boxes into  the state on 21 June. Thugs are also primed to disrupt vote counting in APC strongholds. They will be under orders to  shoot into the air but if unsuccessful, to shoot directly at the people. They have  equally  recruited some mid level  rogue elements  within INEC who will ensure that voting materials are either not supplied at all, or brought in very late to polling centres where they  suspect the  APC candidate will win.

The most sinister of this criminal gang’s plan which is already ongoing in all Yoruba states, however, is the devilish process of political recruitment to which former governor Segun Oni referred during the APC Mega Rally in Ado-Ekiti. Having been used to maximum effect in a particular Southwest state where millions were turned to literal political slaves ahead the 2011 general elections, it is now being extended into all the other states and as I write this, I have a copy of their  membership application form  which  the Lagos PDP is already distributing. I am reliably informed  Fayose is doing the same thing in Ekiti already. The phony empowerment organisation coyly  attracts recruits with promises of jobs and credits but the two most important  questions on the application form are: the applicants’ Voters card number, for purposes of  cloning ahead the 2015 elections, and his/her mother’s name, for ritual purposes.

The initiation process, so beguilingly simple is extremely dangerous going by what a nearly entrapped woman confessed. According to her, she was ferried, with others in a luxury bus  to a certain town  ostensibly for empowerment.  Getting there, they were asked to fill a form in which it was compulsory for them to supply their mothers’ names and voter’s card number. Suspecting foul play she gave wrong names for both herself and her mother. Then  into an inner room where a Moslem cleric was waiting to administer oaths of allegiance. After this came a herbalist  for another oath.  From there  they were herded  to another town in the state  to swear to two powerful Yoruba Deities one of which is reputed to suck the  blood of those who backslide. Then comes the dark large space inside the building where they all stood on blood as a man in white emerged with a gourd of water for the final oath-taking. She said she pretended like drinking the water but did not.  Engr Oni has warned against going to seek help from people who will make you swear to oaths, naked in a coffin and  thereby succeed in making you their slave for life. Awo, the Avatar, must be squirming in his grave.

If care is not taken, these questionable characters will turn most of  the youth in  Yoruba land to political zombies who they will use as bargaining chips for their political harlotry , especially in 2015 and even beyond.

Obviously, they have, in their giddiness, forgotten that  there is God.  As a result, they cannot remember how God miraculously took Israelites out of Egypt or, nearer home, how God saved  the likes of  General Oladipo Diya  from certain death in Abacha’s gulag.  As the Lord liveth,  they will fall victims of their  own diabolical plans as Ekiti will never return to Egypt nor will it ever again be ruled by crooks. Ekiti, the land of honour and distinction requires  not ragamuffins but a  visionary leadership.  Vote Fayose and turn this distinctively unique state into a plaything for not only President Jonathan and his Niger Delta boys but also the likes of Buruji Kashamu and Bode George.

We must all therefore refuse to be intimidated  come  21 June 2014 whatever the enemy’s armada. For them, nothing is sacred or sacrosanct. They will therefore descend on us  in all their fury, believing we will vote with our legs. But as Ashiwaju Bola Ahmed Tinubu never ceases to say, power is never served ala carte. We must stand our ground and shame these vampires. We must vote John Kayode Fayemi overwhelmingly to  victory.

This article was first published in The Nation on June 15, 2014.

Ongoing Investigations, Clampdown On Corrupt Nigerians, Saboteurs Will Be Sustained –...

Drivers Caught With Fake License To Be Prosecuted – FRSC