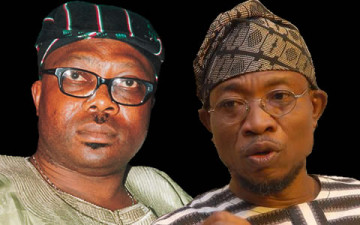 The Osun State chapter of All Progressives Congress (APC), has faulted the reasons adduced by the Peoples Democratic Party (PDP) governorship candidate, Senator Iyiola Omisore, for not showing up at a pre-governorship election debate in Osogbo, the state capital last Saturday.

It described the PDP candidate’s arguments as “the wisdom of a fool”.

Omisore had reportedly claimed that he was supposedly superior to the APC candidate and incumbent, Governor Rauf Aregbesola, which made it a match “between two unequal parties”.

He also inferred that the “weaker of the two parties may resort to physical assault and harassment”.

But the Osun APC, in a statement signed by its Director of Publicity, Research and Strategy, Barr. Kunle Oyatomi, noted that it was disheartening that Omisore’s remark came after the event, adding that “Aregbesola was majestic and at home with facts and figures on how his administration had prudently managed the state’s economy”.

It added: “Omisore sounded mean and shallow when he tried to denigrate Aregbesola’s academic qualification that the governor ‘presented O’Level (certificate) to INEC’. Again, that’s the wisdom of a fool; but for the foolishness embedded in that piece of information is that Omisore’s current certificate presented to INEC was a court affidavit in place of his primary and secondary school certificates.

“What moral authority then has a man who till today presented court affidavit to show that he went to primary and secondary schools to denigrate another person who he said presented his O’Level certificate to INEC?”

Omisore, the APC said, has missed his chance to convince the world that he was mentally and intellectually mature enough to handle difficult situations under pressure in a robust and critical debate.

“The truth of the matter is that, like all inadequate personalities, Omisore was and continues to be afraid of confronting Aregbesola who can expose his lies with incontrovertible facts. That was why he ran away from the debate – simplicita!” it stated.

Recall that the debate, which was organized by the International Republican Institute (IRI), was attended by only Aregbesola, who had all the time allotted for the ‘Manifesto Hour’ programme to himself. The Labour Party candidate in the August 9, governorship election, Mr. Fatai Akinbade, sent his running mate to stand in for him, but was disallowed by organizers, who explained that candidates would not be represented by proxies.

Everything Big About Me Today Started Small – Ronaldo

I Am Committed To Improving Public Schools In Lagos State —...