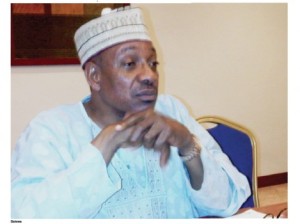 The son of Alhaji Tafawa Balewa, Nigeria’s First Republic Prime Minister, Dr. Abdul Jelil Tafawa Balewa, has declared his intention to contest the 2015 presidential election. He, however, did not say under which platform.

According to him, having consulted widely, he was convinced that Nigerians had been yearning for a new leadership, capable of fulfilling the high expectations and aspirations of the greater majority in the country.

Dr. Balewa, who was speaking with journalists on Sunday in Abuja, said with the right political party, he was fully prepared.

While attributing his interest in the presidential race to the prompting of those he described as “well-meaning elder statesmen from across the geo-political zones of Nigeria”, Balewa said he was more prepared to take up the challenge.

He said, “My entry into politics would add some values to the Nigerian democracy given the finesse, candour and pragmatism, which I will be infusing into the system based on experiences.

“My closeness with President Goodluck Jonathan has made my attempt to lead Nigeria more interesting. However, my ambition is not a do or die affair. Jonathan is a pragmatic politician who has always welcomed free and fair contest”.

On his silence on which political platform he would vie for the presidency, Balewa said it was “for strategic reasons”.

He said, “Some political parties have been talking to me. I have more than two of the parties including the major ones showing interest. It would be unfair for me to start dropping names, more so when consultations were still ongoing on the next line of action”.

The medical doctor said although he had spent a long period of time in the US and Britain in quest for knowledge, nonetheless, he had kept track of and been involved in the local politics of Nigeria.

He said with his wealth of experience in politics, he had in the past contributed to successes of some public office holders both at the state and federal levels.

When asked whether he had the financial war chest to prosecute his presidential ambition, Balewa, who said he had “never been a pauper”, insisted that good Nigerians would support him.

He said, “We place too much emphasis on money in this country and that is why our politics appears repressed and clumsy.

“I have never been a pauper; all the same, we have people who are deeply committed to my cause and ready to see me through.

“I am not going to let the cat out of the bag yet. I have my game plans to beat this emphasis on huge money to buy votes. I am going to do things differently and God will help me”.

Compliments Of The Season To Everyone With Love – Don Jazzy

Police Arrest Man In Plateau For Selling Wife For Sacrifice