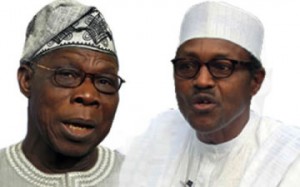 Former President, Olusegun Obasanjo who has publicly shown his support for Major-General Muhammadu Buhari ahead of the elections, has congratulated him over his victory.

In a letter to the President-elect, Obasanjo said his success and victory after three unsuccessful attempts must be great object lessons for the former head of state and for all politicians in the country and beyond.

“For me, the totality of 2015 elections hold many lessons for our democracy and democratisation process which are both maturing,” Obasanjo said.

“On this occasion, the system has been unnecessarily overheated before and particularly during the campaigns when emphasis was more on trivialities and hate, divisive, undignifying and disrespectful statements and comments rather than on pressing issues requiring attention,” he pointed out.

However, Obasanjo said the President-elect, in victory, “will be magnanimous to start binding the wounds and bitterness occasioned by the campaign and the evil disciples.

“With so much harm already done to many national institutions including the military, which proudly nurtured you and me, you will have a lot to do on institution reform, education, healthcare, economy, security, infrastructure, power, youth employment, agribusiness, oil and gas, external affairs, cohesiveness of our nation and ridding our land of corruption.

“Your varied and wide experience will undoubtedly stand you in good stead.

“I am also sure that there are men and women of goodwill, character and virtue across the board that you can mobilise to join hands with you in the reform, repairs and re-direction that will be imperative to put Nigeria back on the fast lane of good governance, unity, cohesiveness, development and progress.

READ  I Have No Personal Debt Collector – Abubakar Malami

“Once again, I felicitate with you and wish you well,” Obasanjo stated.

Our Case Against Saraki and Ekweremadu Still In Court, Says Pro-Lawan...