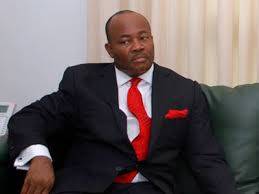 The Peoples Democratic Party caucus in the Senate on Tuesday announced the appointment of Senator Godswill Akpabio (Akwa-Ibom North-West) as the Minority Leader in the Red chamber.
Making the announcement, President of the Senate, Bukola Saraki, also announced the appointment of Senator Emmanuel Bwacha (PDP Taraba South) as Deputy Minority Leader.
Other appointees of the PDP are Senator Phillip Aduda (PDP FCT), Minority Whip; and Senator Biodun Olujimi (PDP Ekiti South), Deputy Minority Whip.
But Senator Kabir Marafa (APC Zamfara Central) immediately challenged the appointments, saying they violated the Senate’s rules on ranking.
Marafa, who particularly challenged the appointment of Senator Godswill Akpabio who is a first-time senator as minority leader, urged that the appointment should be declared null and void.
Citing Order 13(2) of the 2015 Senate Standing Rules, he argued that a ranking senator was supposed to have occupied the position given to Akpabio.
However, the Deputy President of the Senate, Ike Ekwerenmadu, insisted that the appointment of the officers was PDP’s affair and not the business of Marafa, who is an APC member.
He clarified that the rule on ranking only stipulates that ranking senators should be considered first before other non-ranking senators, stressing that the constitution allows any senator to occupy any position.
“If the ranking senator cannot take the position for any reason, then the next level of ranking senators can be considered”, he said.
Saraki ruled Marafa out of order, saying the PDP senators were not complaining and as such, urged Marafa to “stop crying more than the bereaved”.

Getting rich off Chinese ‘fraud’ on Wall Street

Stop Saying Buhari Should End Boko Haram, You Have A Role...