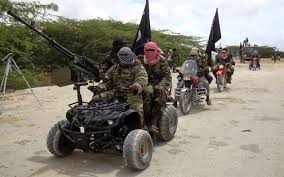 This attack comes two days after suspected Boko haram insurgents attacked the Geidam community in the state where they burnt down shops and carted away drugs in the hospital.

Speaking to a local source, Adamu Bura, he said the terrorists first laid ambush to a military patrol vehicle on the highway and later stormed the village setting some structures ablaze.

“They laid ambush to a military vehicle then later proceeded to the Gujba town. We have fled to the bush but we can see smoke everywhere,” he said.

The Yobe State Police Command also confirmed the attack via a telephone conversation.

The Police Public Relations Officer in the state, ASP Dungus Abdulkarim, however, said that the information on the casualties is still sketchy.

But efforts made to reach the acting Assistant Director of Public Relations Sector 2 Operation Lafiya Dole, Lieutenant Kennedy Anyanwu, proved abortive as his line was busy.

The recent attack has created fear among the residents considering the fact that where the attack took place is just 30 kilometres away from Damaturu, the state capital and 24 kilometres south where the Tactical headquarters of 27 Taskforce Brigade of the Nigeria Army, Bunigari is located.

Although relative calm has returned to the area, authorities are yet to disclose the number of casualties and properties damaged.

DJ Cuppy Opens Up On Relationship With Victor Anichebe

A Glimpse Of Blanck Digital’s Issue 3: Rita Dominic Is Dating...