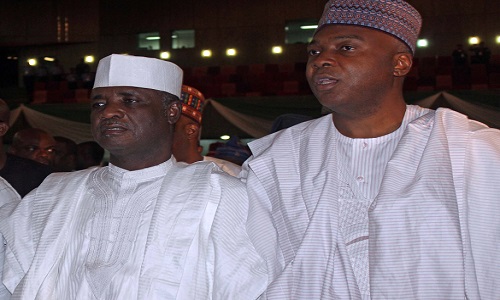 The Senator representing Sokoto North on the platform of All Progressives Congress (APC), Senator Aliyu Wamakko, has absolved President Muhammadu Buhari of blame in Senate President, Dr. Bukola Saraki’s ordeal, especially his case before the Code of Conduct Tribunal (CCT).

Wamako, a former Sokoto State governor, was among the group of senators, who accompanied Saraki when he appeared before the CCT last Tuesday.

The former Sokoto State governor speaking at the weekend, said: “I see Mr. President, Saraki and senators holding a meeting very soon on how to salvage democracy, which certain elements have been trying to subvert. They will find time to meet to stop our opponents from progressing with acts to sabotage our democracy.

“Once the President and the Senate leadership sit on a round-table with a resolve to re-oil the wheels of democracy for national progress, the cynics, the political rabble-rousers and those who never mean well for the APC government will go to sleep”.

Wamakko noted that Saraki, having submitted himself to the law by appearing before the CCT, has helped the case preferred against him by the Code of Conduct Bureau (CCB).

He, therefore, urged Nigerians to stop pre-empting the course of justice.

The senator noted that those hoping to promote discord between President Buhari and the Senate president, banking on excuses, would soon realise that democracy has advanced with more senators anxious to make it work.

Wammako also dismissed calls for Saraki’s removal by those he described as “faceless groups outside the National Assembly”, saying their agitation would end up as “an ill-wind that will blow no good for the Senate, democracy and Nigeria”.

READ  My Thoughts And Prayers Are With Abba Kyari – Atiku

According to him: “Majority of senators weeks ago, passed a vote of confidence in Saraki because they were convinced that his style of leadership has been broad and progress-inclined. Nothing has changed. Majority of our colleagues still believe that Saraki remains a stabilising factor in the Senate for now.

“A change of leadership, at this point in time and as being canvassed, will certainly spark some endless sessions of rancour, suspicion, crises and uncertainty among members. When such begin to happen, no one will be able to predict the end”.

Wamakko pointed out that Saraki shares the same ideology of “change” with President Buhari, adding that every step so far taken by the Senate had been inclined towards promoting the change mantra, with national progress at the core of all considerations by senators.

He further dismissed speculations that there was a plot to replace Saraki on the strength of his case before the CCT, arguing that the reality on the Senate issues never tallied with the reports of a search for the Senate president’s replacement.

He insisted that senators were rather meeting to strengthen the Senate under Saraki with a view to recovering the lost grounds on the legislative business under the All Progressives Congress (APC) government.

Does Jose Mourinho Deserve Any Respect?