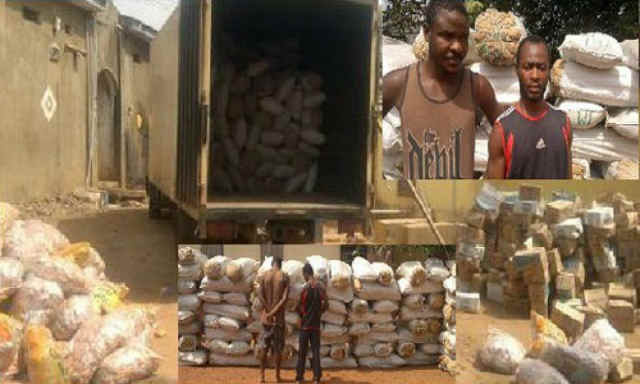 The 3,542.25kg bags of banned narcotics were intercepted by officials of the NDLEA at the Odeda axis of Ijebu-Igbo in Ijebu North Local Government in Ogun State.

The two suspects are Ihenacho Chinweuba (27) and Uche Enuosa (33). They were arrested in connection with the seizure.

The Ogun NDLEA Commander, Bala Fagge, said the shipment was meant for consumption in Ogun and Lagos States.

“Two suspects were apprehended and are assisting in further investigation”, Bala said.

The suspects in their separate confessions said they were on their way to distribute the drugs in Ogun and Lagos states when they were arrested.

The cannabis was neatly arranged in the inner part of the long containerised truck while the outer section was filled with more than 300 cartons of biscuits and cheese balls.

Enuosa, who hails from Asaba, Delta State said lack of work drove him to drive the truck containing the cannabis.

“I am a plumber”, he said. “I have no savings and the only way I can travel home this festive season is to engage in cannabis business”.

Chinweuba, who hails from Nsiala-Ngwa Local Government Area of Abia State, said: “I am married with children. I have not bought anything for my family this Christmas.

“It was joblessness that led me to this. All my hope was on this cannabis shipment because I know that if we are successful, my family would be happy this season.

“The cartons of biscuits were to hide the drugs but it is unfortunate that we were arrested and my dream has shattered”.

The NDLEA said the suspects would be charged to court soon as investigations into the matter is concluded. [NDLEA]

I Was Offered N405m To Help Launder Funds – Femi Falana

I Want To Help People With My Wealth – Femi Otedola