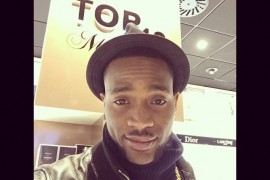 Nigerian singer, D’banj in an interview talks about how he got his endorsement from Slot also dishing on his One Campaign project.

The singer when asked about the humanitarian causes he supports had this to say, “I didn’t choose it I was chose.

One.org approached me in 2013, they wanted me to do a campaign for them across Africa.

Because they had seen that across the world the amount of land still available is in Africa. Am glad it was introduced to me. ” He said.

Also speaking on his Slot deal, the ‘Emergency’ crooner said, “When I got the Beats by Dre deal, I came to Nigeria and we were ready to start dealing , we had a distribution problem.

I started my research and realised the best retailers that can do it for me is Slot since they already do mobile.

Speaking about his business enterprises, Koko Garri and Koko water, D’banj revealed he had always wanted to go into aagriculture and his partnership with the organisation sparked it up.

He said, “I always wanted to do Koko Garri and Koko water, One.org sparked it up.

More importantly, Koko garri is about to do a commercial and am looking for who to endorse.

We are going to endorse someone soon and you’re going to be hearing.”

I Will Make More Money Than King Solomon – Folorunsho Alakija

FG To Increase Petrol Price To N97/Litre Next Year