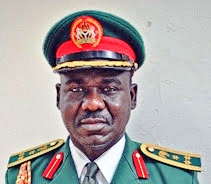 The operation, which is also to flush out bandits and cattle rustlers, will be extended to parts of Plateau, Kano and Bauchi states.

Speaking at the event, the Chief of Army Staff Lt.-Gen. Tukur Buratai called on the people of the area to maintain the peace and avoid reprisal attacks.

Buratai said the operation was to ensure security and safety of the people.

He said that the first phase of Operation Harbin Kunama was conducted in parts of Kaduna and Zamfara States in 2016.

The Army chief assured that the military would always assist civil authority to contain any crisis and stop it from escalating.

Gov. Nasir El-Rufai, who graced the occasion, expressed happiness that two Army Forward Operation Bases were being established in Southern Kaduna in response to the agitation for such outfits in last 20 years.

The governor recalled that the crisis in that part of the state had dragged on for 37 years, adding that the most recent one began in May 2016.

According to him, the crisis has attracted the highest attention because it had been given religious colouration.

El-Rufai, however, said with the conduct of operation Harbin Kunama II and establishment of two forward operation bases in Kafanchan and Kachia local government areas, the activities of armed criminals would be checkmated in the state.

He vowed that the state government would not negotiate with sponsors and perpetrators of the crisis, but would identify, arrest and prosecute them.

The governor stressed that this was one of the three steps the state had adopted to put an end to the crisis.

He said the others were military operations and the process to make the people embrace peace.
El-Rufai called on traditional and religious leaders in the state to play leading roles in that regard.