Jong Un said he reacted to the launch with “great satisfaction.”

The Hwasong-14 missile reached a maximum height of 2,314 miles and traveled 620 miles from the launch point before landing in waters near Japan on Friday.

Analysts say the data suggests that a wide swath of the U.S., including Los Angeles and Chicago, is now within range of Pyongyang’s weapons.

Trump says the U.S. will take all “necessary steps” to protect the homeland as well as U.S. allies in the region, including Japan and South Korea.

North Korea first test-launched the Hwasong-14 on July 4 and Jong Un said the launch sent a “serious warning” to the United States, which has been “meaninglessly blowing its trumpet” with threats of war and stronger sanctions, the KCNA said.

The North Korean flight data was similar to assessments by the United States, South Korea and Japan.

David Wright, a physicist and co-director of the global security program at the Union of Concerned Scientists, said that if reports of the missile’s maximum altitude and flight time are correct, it would have a theoretical range of about 6,500 miles.

That means it could have reached Los Angeles, Denver or Chicago, depending on variables such as the size and weight of the warhead that would be carried atop such a missile in an actual attack.

Meanwhile, the militaries of the U.S. and South Korea gave an immediate response to North Korea’s launch of the intercontinental ballistic missile with their own missile test into the territorial waters off South Korea’s east coast early Saturday.

According to reports, the U.S. military usually refrains from disclosing details about its exercises, but a statement by the Eighth Army linked Saturday’s “combined training event” (drill) directly with North Korea’s ICBM launch. (The Eighth Army is the U.S. force based in South Korea.)

The North Korean missile was launched around midnight Saturday local time in the country’s northwest, landing in the Sea of Japan about 620 miles east of the launch site.

“The ATACMS can be rapidly deployed and engaged and provides deep-strike precision capability, enabling the [U.S. and South Korea] to engage a full array of time-critical targets under all weather conditions,” the Pentagon statement said.

The U.S. military however, tracked the North Korean missile throughout its flight and determined it posed no threat to North America. (NAN) 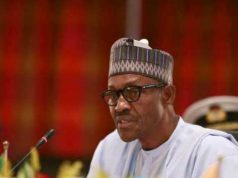 In Bulgaria, living conditions for asylum-seekers improves, but gaps remain –...

Alcohol Was Behind My Nude Video – Etinosa

You Have No Right To Tell Someone Else When To Heal...